Should 'Big Chunk' of Greenbelt Be Used for Development?

There is an ongoing dispute over the issue of available land in the Greater Toronto Area for new housing units.

Certain developers are saying that house prices are rising because they don’t have enough land to build on.

Since the Greenbelt Act was enacted in 2005, two million acres of environmentally sensitive land have been protected from development. 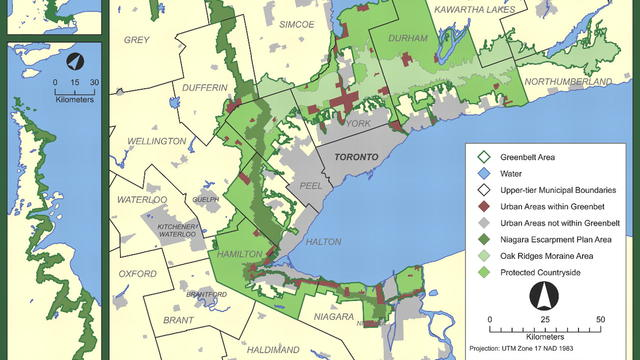 On the flip side, urban planning professionals and environmental activists dispute that argument, saying the Greenbelt has been a key to sustainable development and healthy living. In fact, the provincial government is already looking into expanding the boundaries of the Greenbelt.

Affordable housing and development will undoubtedly be a hot topic during the upcoming provincial election. Now it appears that one of the party leaders has given his thoughts on the matter…albeit perhaps not expecting it would go public. Almost as quickly, however, he has walked back on his words.

In this recorded video during the Ontario PC leadership campaign, then candidate Doug Ford was caught on tape telling a group of developers he plans to “open up big chunks” of land in the Greenbelt for development in order to drive down housing prices.

The future leader also mused that he wished that it was his idea, but admittedly said “it came from all of you,” referring to members of the development community. Ford also said that while he would open up land, he would also consider swapping land into the Greenbelt and changing the boundaries.

The backlash against the notion, however, was swift.

Earlier today, Ford’s team released a statement saying that Ford has vowed not to touch the Greenbelt.

“This afternoon, Doug Ford announced that after consultation with the people of Ontario, and Ontario PC government would maintain the Greenbelt in its entirety,” the statement reads.

So while the Greenbelt is safe, Ford isn’t the only one to consider building on it.

In fact, Ford is somewhat correct that development was not his idea; some time ago, former Mississauga mayor Hazel McCallion was espousing this view while her successor Bonnie Crombie argued against developing in the Greenbelt.

Naturally, this didn’t sit well with those who are in support and strong advocates of the Greenbelt.

InHalton.com received a press release from a group called Environmental Defence who wanted to “set the record straight on the Greenbelt.”

“The Greenbelt has protected 1.8 million acres of farmland, local food supplies, the headwaters of our rivers and important forests and wildlife habitat for over 12 years. Polling shows its protection is supported by over 89 per cent of the Ontario population,” said Tim Gray, executive director of Environmental Defence.

Gray also said the motivation behind this proposal was basically about developers’ desire for more profits, citing the following consequence to opening up Greenbelt land for development:

Even if you don’t believe in access to clean drinking water, or farm fresh food locally grown, or flood prevention in our built up areas, then at least support our Greenbelt because of the unbearable traffic congestion more sprawl will cause. #NotAffordable

Conservative MPP Sam Oosterhoff from Niagara West put out this tweet in an attempt to clarify his leader’s position on the Greenbelt right after it started generating more robust discussion.

To be clear: we believe in protecting the Greenbelt. Anything we look at to allow for much needed housing development, we will do in a measured and sustainable way: we will add the equivalent land to the Greenbelt. That means there will not be an inch less of protected land.

A recent study by the Neptis Foundation found that the Greenbelt doesn’t constrain housing supply and that there is enough land within the existing urban boundaries of the GTHA for housing development up to the year 2031.

There was also this report from Ryerson University’s City Building Institute which reached similar conclusions when it found there is potential within Mississauga proper to accommodate 160,000 new housing units.

Ford’s remarks on the video probably obviously didn’t do him any favours with voters his party is looking win over who don’t want another Liberal government but are concerned about Ford being in bed with big business.

The Liberals have definitely played up that sentiment, saying Ford can’t be trusted. Of course, Ford’s most ardent loyal base of supporters couldn’t care less what he says or thinks, so as long as Kathleen Wynne gets kicked out of office.

But as more people move in the next few decades, putting strain on our health care, public infrastructure and social services, the debate over land use in this province, during the election campaign and after, is going to get contentious as we figure out how to properly house all the people coming in.

What do you think of Ford’s initial idea for opening up Greenbelt land to development (even if he’s backtracked on it)?