Closure this weekend of major Mississauga intersection at QEW 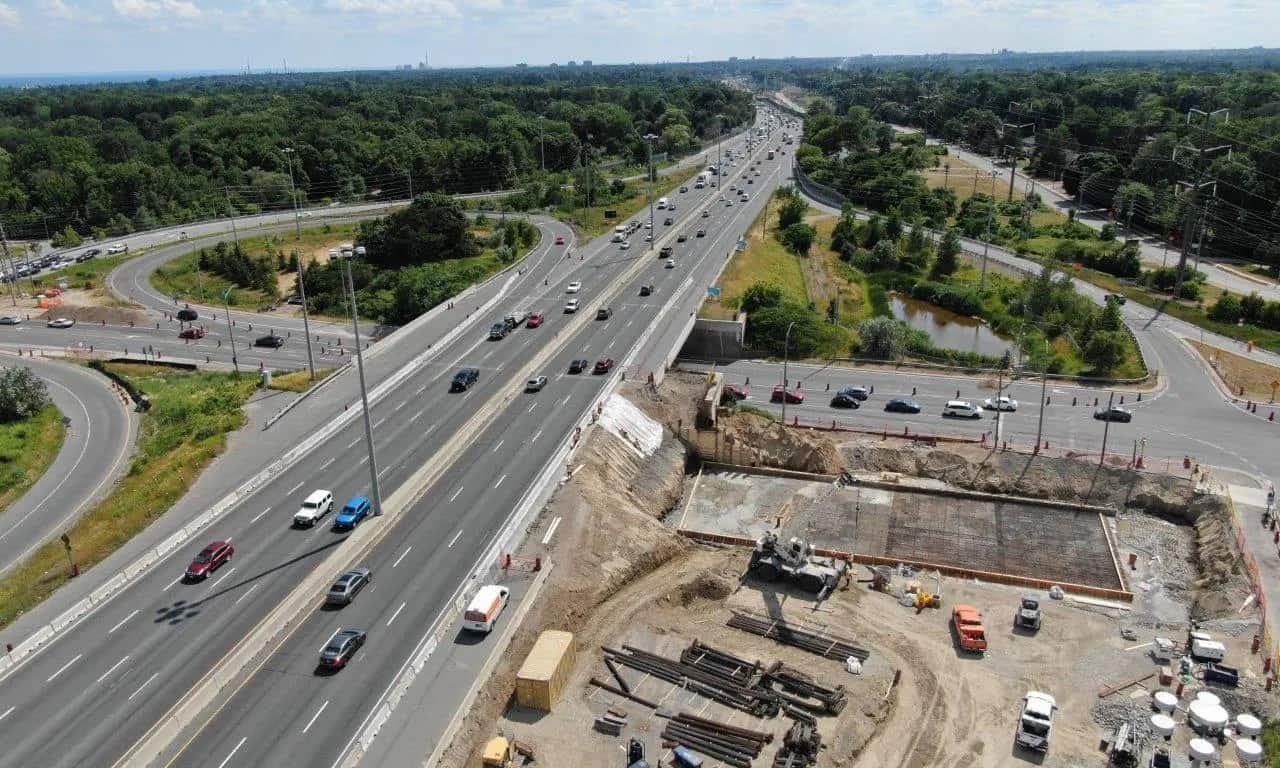 A major QEW interchange in the heart of Mississauga will shut down to traffic this weekend (Oct. 28-31) as crews get to work on building an underpass for the new $1.4-billion Hurontario light rail transit (LRT) line.

From 10 p.m. Friday night until Monday morning, Hurontario St. between North and South service roads will be closed to traffic.

Other lane restrictions, including lane reductions on the QEW, will be in effect as well as work crews use an innovative new technique that’s described as a first in Ontario and expected to significantly reduce the work time and associated traffic impact.

The underpass represents the latest and one of the more significant undertakings of the massive LRT project, which will see an 18-kilometre transit route between Port Credit GO station in south Mississauga and Brampton completed by fall 2024.

When the Hazel McCallion Line opens, it will feature 19 stops along the route.

“Necessary construction work is required to help bring the new LRT to life, which may cause temporary disruption for some drivers and residents,” officials with Metrolinx, the provincial agency overseeing the project, said in a recent news release. “To minimize disruptions as much as possible, innovative construction techniques are being used to reduce the duration of the work.”

📢 Starting 10 pm on Friday, the intersection at Hurontario & #QEW will be closed for the QEW push box work. This will impact traffic on the QEW with lane reductions. The intersection and all lanes will reopen the morning of Monday, Oct. 31. https://t.co/XFlO6m7f6Q #HuLRT #Peel pic.twitter.com/PYf6e4e9Ul

Work will begin with the installation of a “push box,” a large and hollow concrete “box” that will be pushed into place to form the new underpass.

Importantly, Metrolinx officials note, a new technique is being used to save time.

“The box is being pushed over 55 hours through the QEW, which is a record timing,” said Rhythm Vyas, a project coordinator at Mobilinx, constructor of the Hazel McCallion Line. “Without these innovative methods, construction of the underpass, in my estimate, would have taken over at least one-and-a-half years and been significantly more disruptive to traffic.

“This push box infrastructure will be the first of its kind to be pushed through a highway in Ontario,” Vyas added.

Currently, work crews are building the roof of the “push box,” which will be directly under the QEW. Once that’s completed, the QEW will be excavated while hydraulic jacks will simultaneously push it into place, officials say.

If City of Mississauga officials get what they want, the “transit loop” that would serve people living in highrises in the city’s downtown core will once again be part of the LRT project.

But Mayor Bonnie Crombie and council must convince Ontario Premier Doug Ford it’s a necessary expense or, failing that, get more money out of developers.

In addition to recent work on utilities, crews working on the Hurontario LRT have also been focusing on completing tasks around two major creeks in Mississauga in an effort to prevent devastating local floods in the future.