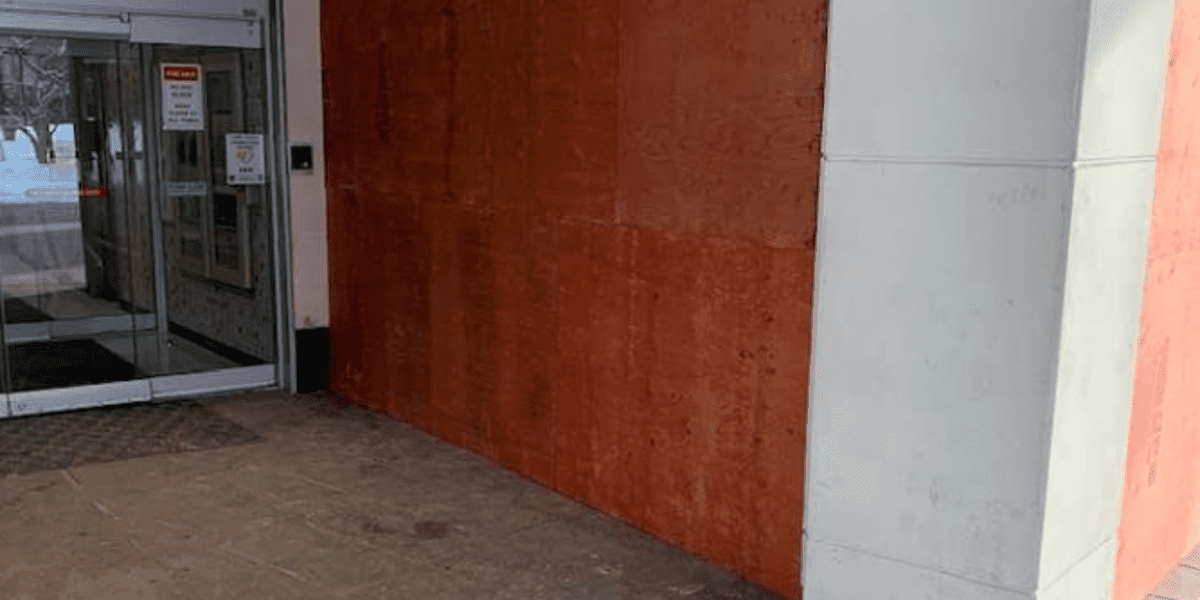 Temporary plywood installed at the rear entrance of Hamilton City Hall — blocking the heaters frequently used by the homeless — has stirred up controversy. (photo by Roger Boyd)

Temporary plywood installed at the rear entrance of Hamilton City Hall — blocking the heaters frequently used by the homeless — has stirred up controversy. Not only among advocates for the housing insecure but there was also concern regarding the legality of the hoarding installation and materials.

A spokesperson for the City says the decision to install the hoarding followed “occupational health and safety, property maintenance, and fire code concerns.”

“Those concerns also included several incidents of violence and drug use taking place at the entrance to the workplace,” according to Michelle Shantz, communications officer for the City Manager.

Advocates, however, have called the City’s decision cruel and inhumane — particularly during the recent cold alerts where temperatures have dipped below minus-20 degrees Celsius.

The City has said that individuals who seek shelter will continue to have access to expanded shelter spaces and warming centres during cold alerts. Advocates say, however, there is not enough adequate shelter space and some individuals simply refuse to go.

Roger Boyd is a local chaplain who founded Men’s Street Ministry. He provides regular updates on his social media as Boyd and his team of volunteers distribute clothing and between 700 and 1,000 meals per week to the homeless.

Boyd posted before and after photos of the rear entrance of City Hall where the heaters are located.

Questions have also been raised regarding the hoarding installation and its by-law implications. Specifically, whether it was installed without a proper permit and if the materials used are actually a fire hazard.

The City says it performed a review and determined that “although the structure is safe, a miscommunication between departments led to an error related to materials and permitting.”

It was confirmed that a building permit was required for the temporary hoarding but was not obtained. A heritage permit was not required, however, because the fasteners don’t penetrate the building facade.

“As a next step, City staff will be obtaining the necessary building permit to confirm that the structure is in compliance with the Ontario Building Code,” said Shantz.

Additionally, the City says the plywood material initially used to erect the hoarding was replaced with the appropriate fire-resistant material.

A third-party engineering firm has also been hired to review the structure.