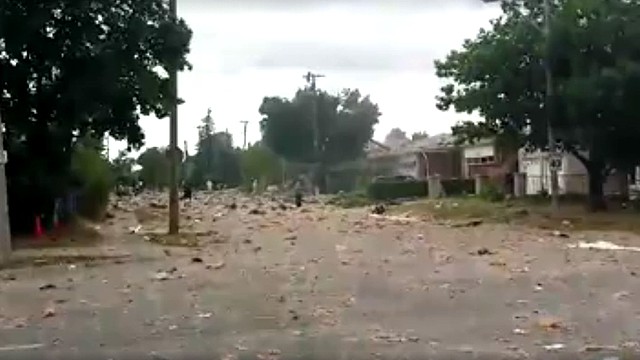 Reports are early but according the Peel Regional Police Twitter account that a house on Hickory Drive near Dixie and Rathburn has exploded.

CLICK HERE FOR THE LATEST UPDATE ON THE EXPLOSION

Updates will be posted below:

Explosion in Mississauga? Right across from my condo? Anyone know what's going on? #BreakingNews #CP24 pic.twitter.com/3R7f9S07v8

Reports of an explosion on Hickory Dr, Dixie and Rathburn Rd E. area, PRP, Fire and EMS on scene. Please avoid the area. Updates to follow.

Media officers will be heading to the scene. ETA 20-30 minutes

UPDATE: House levelled in explosion on Hickory Drive, Miss. Cause U/K. Large perimeter set up in area- homes being evacuated. 1/2

Multiple injuries from explosion. Extent of injuries u/k at this time. Avoid area. Update to follow. 2/2

#BREAKING: Toronto paramedics at the scene of Mississauga house explosion say one person is without vital signs.

#BREAKING: One person has been pronounced dead following a home explosion in Mississauga, paramedics say.

Mississauga Mayor Bonnie Crombie says between 50 and 100 people have been evacuated from the area.

People evacuated from their homes are being received at 1500 Gulleden Drive- Burnhamthorpe Comm. Centre.

Utilities are being cut off in the Hickory Drive area in Mississauga so that the site of a home explosion can be stabilized, the city says

Police say there is no information about the identity of the person who died at the moment.

One house was leveled in the explosion, and one home each on either side was damaged, police say.

#ChiefEvans is currently speaking with the media and community in a live scrum at the scene. pic.twitter.com/MqKtK4btgG

1/2 Anyone effected by the explosion on Hickory Woods is asked to attend the Burnhamthorpe Community Centre.

2/2 you can seek medical, shelter and food. As well, the Insurance Bureau of Canada will be there to answer questions from homeowners