CAUGHT ON VIDEO: Fire Starts Back Up at Heart Sushi in Mississauga 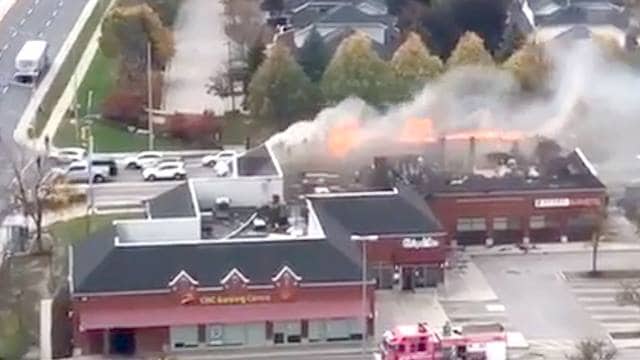 Another blaze appears to have broken out at the Heart Sushi restaurant at Bristol and Hurontario in Mississauga.

Around 3:00 p.m., a reader sent inSauga.com a video showing the roof of the restaurant up in flames.

Fire starts back up at Heart Sushi in Mississauga from insauga on Vimeo.

Peel police say that Mississauga Fire and Emergency Services have confirmed that the blaze is back and the roof is currently on fire.

According to police, the restaurant has becom engulfed in flames.

No injuries have been reported in connection with the fire, as the buildings were kept clear of people after the initial fire broke out in the morning.

According to Mississauga Fire and Emergency Services, eight trucks attended the fire after it was initially reported at 6:11 a.m. this morning—along with three support vehicles, a command team and 35 firefighters.

Platoon Chief Daniel Ennamorato said that inspectors believe the fire, which has not been deemed suspicious, began in the kitchen area.

“The restaurant is completely gutted and the roof has been affected,” says Ennamorato, who added that two other restaurants, popular Hakka resto Bombay Chopsticks and Naan Kabob, were also hit.

The nearby CIBC bank was temporarily shut down as well.

Fire crews are still on scene attempting to contain the blaze.