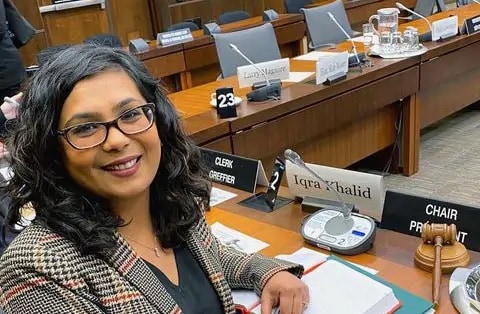 Mississauga MP Iqra Khalid introduced an anti-Islamophobia motion that was passed in the House of Commons in 2017. (File photo)

A Canadian Muslim advocacy group is adding its voice to a call for all federal parties to support the creation of a special office to try to dismantle the rising Islamophobia in Canada.

On Wednesday afternoon, the National Council of Canadian Muslims (NCCM) asked allies to call on the major federal parties to support the creation of an Office of the Special Envoy on Islamphobia. The call comes in the wake of the alleged terroristic quadruple murders in London, Ont., in June. A 20-year-old man, Nathaniel Veltman, allegedly attacked five members of a Muslim Pakistani Canadian family with his truck. Four family members died and a nine-year-old boy was injured and orphaned.

“Our communities have faced terrible violence in the last five years,” the NCCM’s Twitter thread reads in part.

“We have heard government and all party leaders say clearly and decisively that we must stand against Islamophobia. That must mean dedicated resourcing to specifically combat Islamophobia.

“This election we ask for accountability. All of our political leaders have spent the last two years talking about how Islamophobia, discrimination and hate are unacceptable. The safety, security and dignity of our communities matters.”

Canada is home to more than 1 million Muslims, according to a Government of Canada release from July. A National Action Summit on Islamophobia was held in late July of this year. Following that event, the Mississauga-based Muslim Association of Canada applauded some of the Liberal governments’ anti-racism initiatives. It also called for “a federal office to implement an anti-Islamophobia strategy,” as well as reviews of possible selective enforcement by the Canadian Border Services Agency and Canada Revenue Agency.

The NCCM’s post on Wednesday also states “the reality is that there is no specific office or individuals designated within government with the responsibility of confronting Islamophobia specifically.”

There is a recent precedent for the creation of such an office. Last November, Irwin Cotler was named Canada’s special envoy on preserving Holocaust remembrance and combatting anti-Semitism.

How Canada should confront Islamophobia has become a partisan issues in recent years.

In late 2016, Mississauga-Erin Mills MP Iqra Khalid introduced a non-binding private member’s motion in the House of Commons that called on the Government of Canada to condemn Islamophobia. After considerable debate, it passed in March 2017 with 201-91 support.

1/ Our communities have faced terrible violence in the last five years.

We have heard government and all party leaders say clearly and decisively that we must stand against Islamophobia. That must mean dedicated resourcing to specifically combat Islamophobia. pic.twitter.com/yluq4opadf

The federal government often appoints special envoys to advance Canada’s interests in humanitarian issues both at home and abroad.

Since Cotler’s appointment, it has tapped Stéphane Dion, Canada’s ambassador to Germany, for a special enjoy mission to support Armenian democracy. Jamal Khokhar, the ambassador to Turkey, received a similar appointment to the Organisation of Islamic Cooperation.

On Sunday morning, Prabhjot Singh, a 23-year-old international student from India who was a practising Sikh, was slain in Truro, N.S., which is a town about a one-hour drive from Halifax. The homcide investigation is ongoing.

New Democrat Matthew Green, who is running for re-election in the Hamilton Centre riding, called the killing “a heinous act of terror.”

What a heinous act of terror.

My heart goes out to the friends and family of Prabhjot Singh who came to Canada looking to build his education for a better life and was taken by this vile act of hatred. Our #1 threat of domestic terrorism remains White Supremacy. @WorldSikhOrg https://t.co/gmIDPETyct