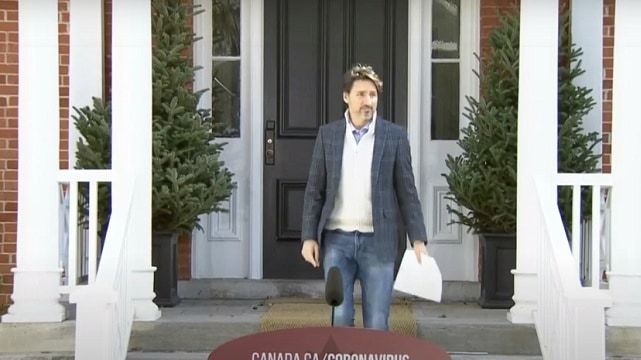 In another address to the nation on Saturday, Prime Minister Justin Trudeau announced more funding for businesses in the country and confirmed that the Canada-United States border will remain closed for another 30 days.

The border was closed to non-essential travel on March 21 and was originally set to reopen on Tuesday.

According to the prime minister, both countries have agreed to extend the current border measures for another 30 days.

“This is an important decision, and one that will keep people on both sides of the border safe,” Trudeau said.

“It’s another example of the excellent collaboration between our two countries, and I want to thank Minister Bill Blair for leading the discussions with the United States.”

When asked about U.S. President Donald Trump’s talks to potentially reopen the U.S. or loosen restrictions, Trudeau said Canada would continue taking necessary measures to keep Canadians safe while ensuring a continued flow of essential supply chains between both countries.

In addition to the federal government’s existing financial aid for businesses, Trudeau announced that it will allocate more than $306 million to support Indigenous businesses.

The funding, which will allow Indigenous businesses to access short-term interest-free loans and non-repayable contributions, will be provided through aboriginal financial institutions and administered by the National Aboriginal Capital Corporations Association.

“Today’s investment will help thousands of businesses bridge to better times, including many that are owned and run by Indigenous women,” said Trudeau.

“And this is just a first step. We’ll have more to say soon on what else we’ll do to help Indigenous businesses and the people who rely on them. Small business owners are at the heart of so many communities.”

Trudeau also announced that the country will continue to receive equipment and supplies to keep frontline workers safe. He reported that two planes full of N95 masks and coveralls arrived in Canada on Friday, with more shipments of medical supplies expected this weekend and into next week.

“I can also announce that we will begin receiving deliveries of face shields from Toronto Stamp very soon,” said the prime minister. “They’ve shifted from their usual production of rubber stamps and ID badges, and will be providing millions of face shields over the next two months.”

In regards to Parliament expecting to reopen on Monday, the prime minister said it’s “obviously not a good idea” and stated that his party has proposed measures that are still being discussed with the other parties.

“We certainly hope that we’re able to come to an agreement so that we don’t all have to convene in the House of Commons on Monday morning,” the prime minister said.