Caledon cops search for suspects after iPhones stolen at gunpoint 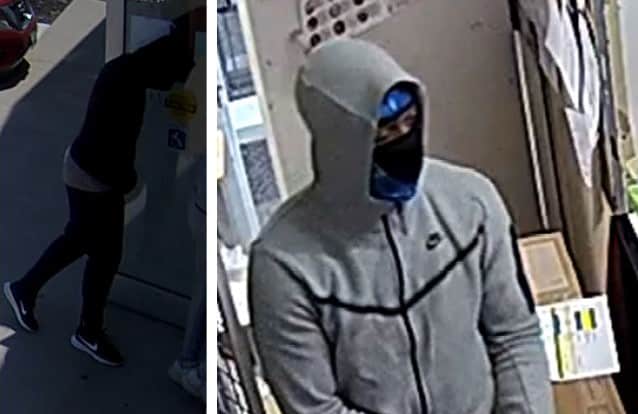 Police are asking the public for help identifying two suspects in a daylight armed robbery in Caledon this week.

Shortly after 2:30 p.m. on Wednesday, the Caledon OPP say officers were called to a retail store on McEwan Dr. in Bolton for reports of a robbery.

Police say two men entered the store and made off with a quantity of iPhones and used a handgun during the robbery.

The same suspects also attempted to enter a second retail store just prior to this incident but the men were not able to gain entry to the business, according to police.

The two suspects used a handgun during the robbery and fled the store on foot, but believe they may be operating a white BMW SUV, police say.

Police are now reaching out to the public for help identifying the suspects.

The first suspect is described as a black male in his late teens or 20’s. He is of average height standing approximately five-feet-ten-inches tall with a slim build wearing an all-grey Nike tracksuit, black and blue mask, and white running shoes at the time of the robbery.

The second suspect is also a black male in his 20’s, is over 6′ tall and has a muscular build. He was wearing a dark blue hoodie and dark pants that were worn low on the waist exposing grey underwear at the back. The suspect wore a dark mask and black Nike running shoes.

Police say they were last seen walking around Hwy 50 and Healey Rd. in Bolton, as well as around the Walmart and Home Depot plazas.

The two men may have stood out as police say they were walking around in full tracksuits, masks, and hoods despite extremely hot summer temperatures.

If you have any information in relation to this incident, please contact the Caledon OPP Major Crime Unit at 905-584-2241.

You can also provide information anonymously by contacting Peel Crime Stoppers at 1-800-222-TIPS (8477) or online at www.peelcrimestoppers.ca.

When you contact Crime Stoppers you stay anonymous, you never have to testify, and you could receive a cash reward of up to $2,000 upon an arrest.