Burlington daycare doggy lends a paw to pet other pooches 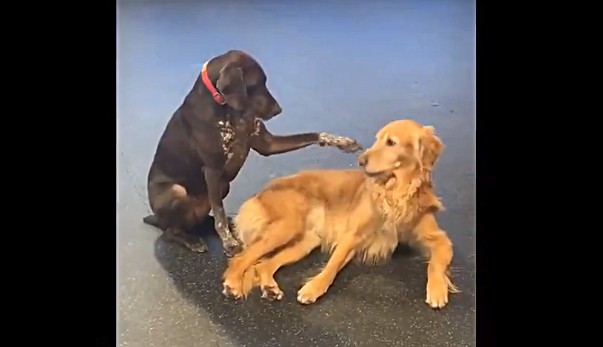 A doggy daycare in Burlington has been playing host to a special pooch who takes on the role of human by going around and petting the other dogs.

Ruby, along with her brother Miles, has been taken care of at the The Den Doggy Daycare at various times the past several years and her behaviour has made her a celebrity. Her many fans believe she is showing genuine compassion for her fellow canines and may sense their need to be touched.

Her antics have been followed on social media since the beginning of the pandemic.

In video clips that have been posted online, the German shorthaired pointer can be seen calmly approaching other dogs and then gently begins to caress.

A worker at Den Doggy says Ruby has garnered a lot of attention and her behaviour is something that most have never seen before. She said the other dogs don’t really react to Ruby’s advances, and it’s hard to tell what her true intentions are.

“We don’t know if it’s an act of dominance or if she is just being friendly, but the other dogs don’t seem to mind and it makes everyone smile.

It’s not known who Ruby’s family is and if she reaches out to pet other dogs in her own neighbourhood.

The popular We Rate Dogs account on Twitter has shared a video clip of Ruby in action and has received almost eight million views.