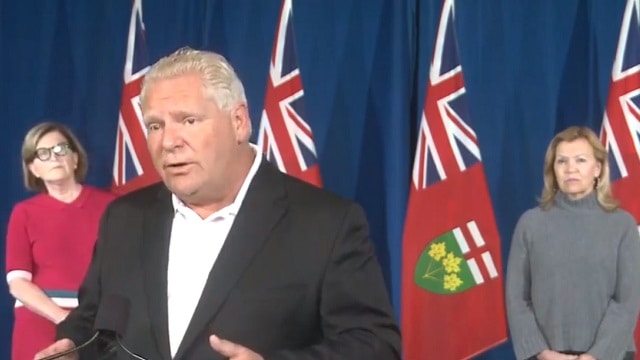 The provincial government says it’s rolling back social gathering limits across the entire province in response to what Premier Doug Ford says is an alarming growth of COVID-19 cases in Ontario.

These restrictions — which were imposed earlier this week on Peel Region, Toronto, and Ottawa — are now in effect for the whole province.

“Clearly, the numbers are heading in the wrong direction,” Ford said. “That’s why we are taking decisive action to lower the size of unmonitored private social gatherings in every region of Ontario. We need everyone to follow the public health rules in order to prevent another provincewide lockdown, and protect all our citizens, especially the elderly and the vulnerable.”

The province says indoor and outdoor events and gatherings cannot be merged together, meaning gatherings of 35 (25 outdoors and 10 indoors) are not permitted.

The province is also looking at amendments to the Reopening Ontario (A Flexible Response to COVID-19) Act, which if passed would establish:

“It is critical that we continue to take the necessary steps to protect the health and safety of all Ontarians,” said Solicitor General Sylvia Jones. “We are making it easier for communities to keep people safe through a broad array of tools and deterrents including stiffer penalties for organizing social gatherings at private residences that violate the applicable size restrictions.”

Today, Ontario is reporting 407 new cases of COVID-19, and one new death associated with the coronavirus.

The figures mark the second time in as many days that the province has recorded more than 400 cases in a 24-hour period.