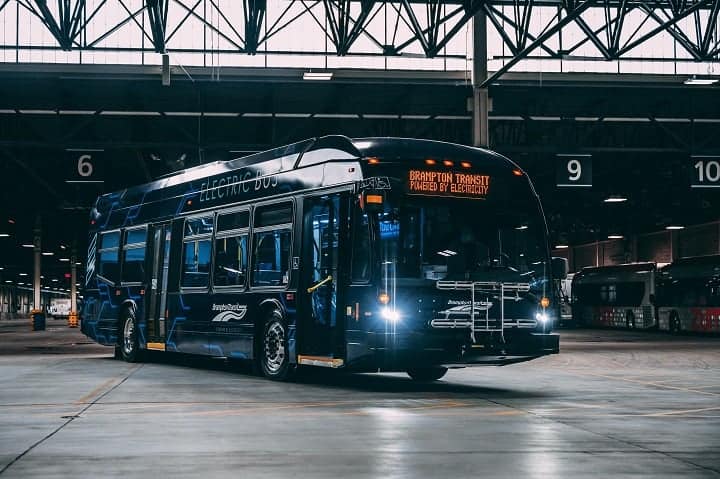 The city is hosting a virtual launch event on Monday, May 3 to celebrate Brampton Transit’s electric buses, which will launch on Routes 23 Sandalwood and 26 Mount Pleasant.

The launch will be livestreamed via the city’s Facebook page.

Join us virtually May 3 at 9 am, for the launch event of our brand new electric buses! Tune in to the City of Brampton’s Facebook page to watch live https://t.co/VjCBvAhe0X. pic.twitter.com/8s4WQUo4Ox

In January the city began welcoming the new vehicles to Brampton Transit’s Sandalwood Facility, with a total of eight electric buses (or eBuses) set to start travelling on Brampton’s roads.

The eBuses are battery-powered by electricity, with electric motors, no transmission, and zero tailpipe emissions — saving approximately 235 tonnes of CO2 per year, per bus, according to the city.

“Brampton Transit is proud to be participating in the first-of-its kind electric bus demonstration and integration trial. The unprecedented initiative has brought multiple levels of government, bus and charger manufacturers, system integrators, academia, and funding partners together to implement electric buses in Brampton,” the city says.

The four high-powered, on-route charging stations will be located at the Mount Pleasant Village terminal, the Queen Street/Highway 50 Züm station, and the Sandalwood Transit Facility, allowing the buses to charge during these stops.

Mayor Patrick Brown called it a very exciting development, saying Brampton will be the first city in Canada to run these new buses.

“Brampton wants to to be a green city,” said Brown, who called the new vehicles “the way of the future” in an interview with Insauga.

“This is an example where Brampton and Canada are being leaders on the environment, showing that we’re a city and a country that understands our green obligations.”

More information is expected soon on which other routes in the city will begin using the new buses.

Are you excited to see these new buses launch?