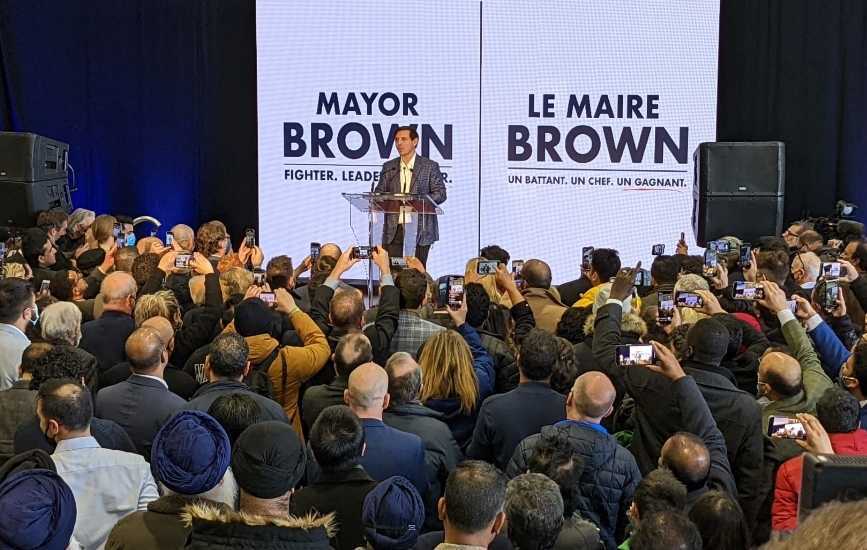 The clock is ticking for disqualified Conservative leadership candidate and current Mayor Patrick Brown to make a decision on running for re-election in Brampton.

Brown spent the weekend attending events in Brampton, but spokesperson Chisholm Pothier says the mayor won’t be making any decisions on running in the October municipal election “until he has time to consult with friends and family.”

Brown was booted from the leadership contest on Tuesday (July 5) after a whistleblower inside his campaign came forward with allegations that workers received payments from a third party.

The five remaining candidates in the race to become the next leader of the Conservative Party of Canada (CPC) flipped pancakes and greeted supporters at the Calgary Stampede, with less than two months to go until ballots are counted and the winner is named.

The mayor entered the race without resigning his job in Brampton, and has said he would consider running again in October’s municipal election if he thought he couldn’t win the federal race.

Brown has until Aug. 19 to register for the Brampton municipal election, which only has two other nominated mayoral candidates as of Monday morning (July 11).

The CPC leadership committee members ousted Brown in an 11-6 vote over an allegation that he breached federal election financing laws.

Brown says he was never given a chance to refute the allegations and is challenging the decision to kick him from the contest, but one Liberal MP is calling for a full investigation into the entire leadership race.

While the party didn’t release details behind the allegation, a longtime Conservative organizer came forward last week as the one who reported Brown to the party, alleging she was paid by a private company for doing work on his campaign.

Brown’s campaign said Conservative party brass refused to release the full details of the allegation and offered to reimburse the money paid to the organizer in question because it thought their work was done as a volunteer.

Since his disqualification, Brown has also accused the party of removing him to stack the odds in favour of longtime Ottawa-area MP Pierre Poilievre, seen as his main rival.

Both Poilievre and the party have dismissed his accusation.

Ian Brodie, chair of the leadership election organizing committee that voted to remove Brown, emailed party members last Friday to say Brown knew the allegations he was facing and the party needed to act because it couldn’t afford to have a candidate under investigation for breaking federal laws.

Meanwhile, Brown has been absent from the last four council meetings in an attempt to block the appointment of an interim city councillor.

Some of Brown’s political critics on Brampton City Council have called for the mayor to step back from his official duties, accusing Brown of trying to shut down a forensic audit of the now-scrapped Brampton University project.