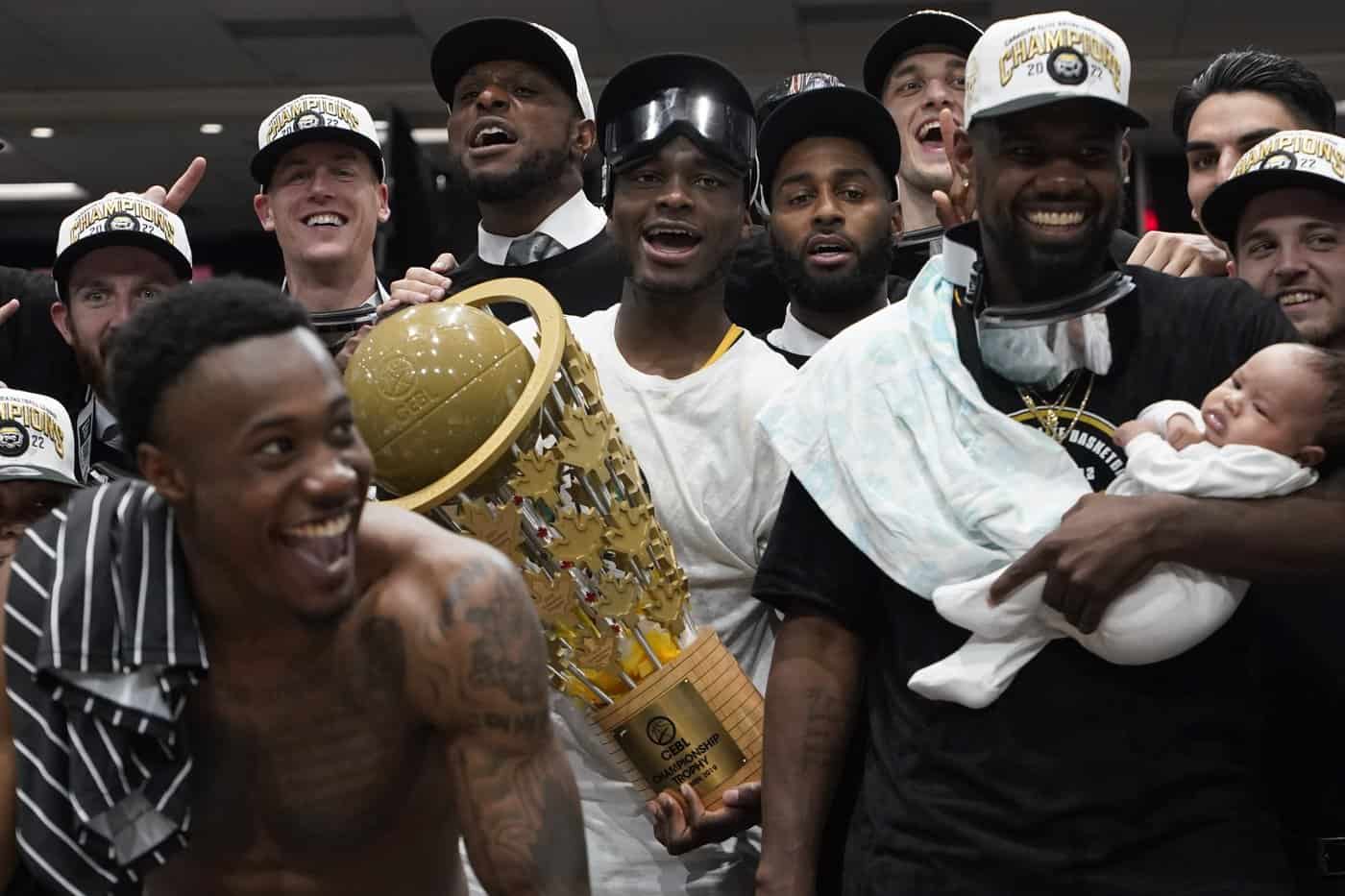 Members of the Hamilton Honey Badgers pose for a photo with the championship trophy and family after winning the CEBL championship final, Sunday, August 14, 2022 in Ottawa. (THE CANADIAN PRESS/Adrian Wyld)

The importance of the Brampton Honey Badgers’ participation in the Basketball Champions League Americas is simple.

“We need more basketball in the country,” said Mike Morreale, co-founder and commissioner of the Canadian Elite Basketball League (CEBL).

Morreale was in Queretaro City, Mexico on Thursday (Dec. 8) ahead of the first window of the group stage of the BCLA – an international competition with 12 teams from seven countries.

The Honey Badgers are representing Canada as the reigning CEBL league champion, and Morreale says Brampton’s team are in for a tough match up when they face off against the Libertadores de Queretaro on Friday and Nicaraguan champions Real Esteli on Saturday.

“I know that the Mexican and Nicaraguan teams are stacked with national team players from their respective countries and also with high-level imports. We have a great team this year, we have top-quality Canadians who have Canada national team experience.

“With that said, challenge accepted, on Friday and Saturday, with all on the line and the best interest of basketball in (Canada), we are excited to be able to do what we do on the international level.”

The BCLA sees teams from South and Central America along with Canada’s national champion competing over the course of four months for a berth in the 2024 FIBA Intercontinental Cup.

The Honey Badgers officially made the move to Brampton from Hamilton last month due to the closure of their old home court at the FirstOntario Centre. The team is assigned to Group A in the BCLA and will play a second window next month, when they travel to Managua, Nicaragua to play Libertadores on Jan. 17 and home team Real Esteli on Jan. 18.

Brampton’s CAA Centre will host the third and final window Feb. 7-9. Tickets for the round of Brampton games are available now, and there is a 33 per cent discount on buying packs of tickets for all three games. Tickets are available at www.CEBL.ca/bcla/tickets.

“For one, it provided an added layer of credibility for the CEBL,” Anderson said. “It is providing coaches and players with an understanding of the FIBA game. And more importantly, it’s providing an opportunity for players to gain international experience and to gain access to various markets in South America.”

The Honey Badgers’ roster for the BCLA is a mixed group of players from various CEBL teams, including seven Canadians who played on CEBL teams this past season. All-CEBL guard Alex Campbell and Murphy Burnatowski, who both were part of the Edmonton Stingers’ BCLA roster last season, as well as 6-11 centre Jordy Tshimanga (Saskatchewan Rattlers) are among the headliners.

With Honey Badgers coach Ryan Schmidt unavailable due to his coaching obligations with the London Lions of the British Basketball League, Sheldon Cassimy will serve as head coach.

At the end of the BCLA group stage, the top two-ranked teams in each of the four groups meet in the quarterfinals to determine who will play in the Final 4. The 2023 BCLA champion earns a berth in the 2024 FIBA Intercontinental Cup.

The Honey Badgers are the second CEBL team to represent Canada in Champions League action. The 2021 CEBL champion Edmonton Stingers competed last season against Real Esteli and Congrejeros of Puerto Rico, finishing the group stage tied for first, but failing to move on based on head-to-head point differential.