Brampton Councillors Put Downtown LRT Back on the Table 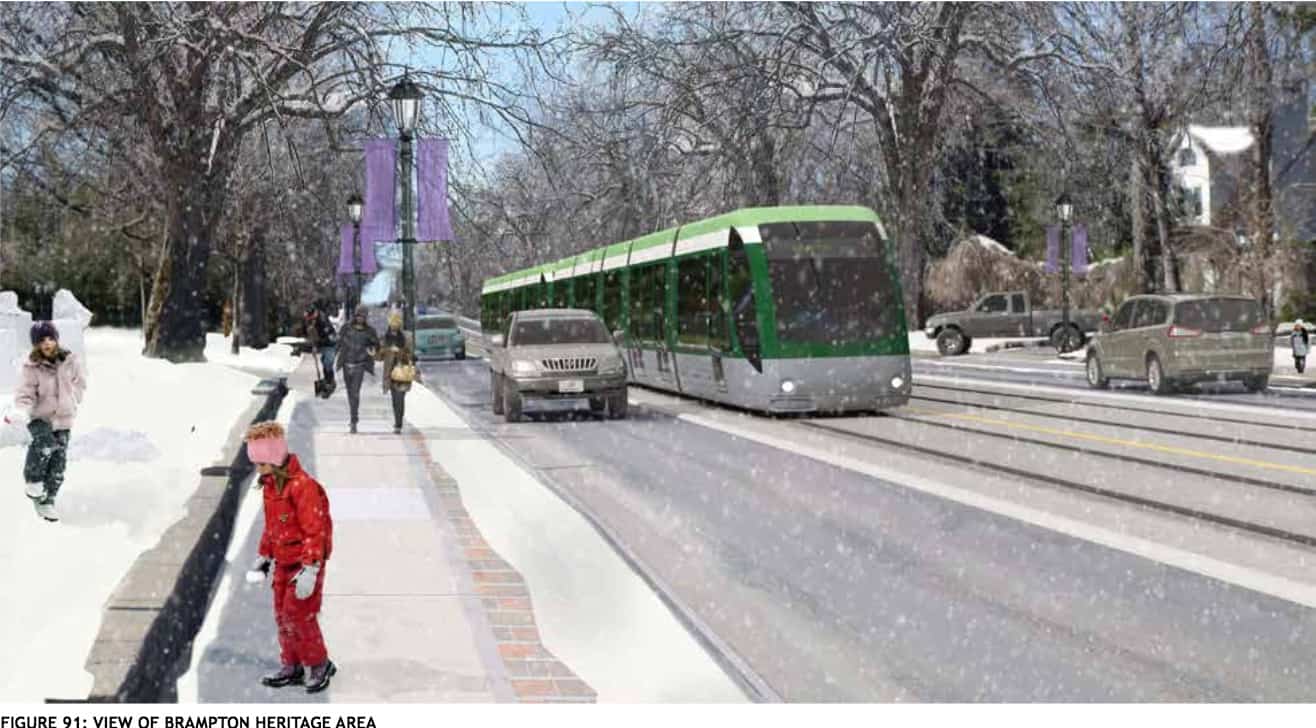 It looks like a previously ‘dead’ plan for light rail transit has come back to life.

It looks like a previously ‘dead’ plan for light rail transit has come back to life.

On the December 5 council meeting, members of Brampton City Council debated and voted on a motion from Wards 9 and 10 Coun. Gurpreet Dhillon that would seek to revive the LRT route along Main Street as part of a wider ‘Brampton Transit Network Plan’.

However, Dhillon’s motion had an additional caveat: the LRT route would go into downtown but continue all the way up to Mayfield Road, while ‘no longer considering’ the studies for LRT alternate routes along Kennedy and McLaughlin.

Mayor Patrick Brown seemed taken aback by the motion, as he did not mention LRT in his inaugural speech but cited other transit priorities like expanding Highway 410 and all day GO services. But the mayor’s opposition to Dhillon’s motion was not that he didn’t want LRT; he thought the city didn’t get or ask for enough the first time around.

“Why are we settling for a pittance of a plan that was so divisive back then?”, Brown asked during the council meeting. The previous council had a public and contentious meeting back in 2015 that saw them reject $1.5 billion in full provincial funding for the LRT along Main Street, which resulted in the current route stopping at Steeles Avenue at Shoppers World.

Brown said the city could, and should, be asking for better, considering there is a federal election on the horizon when campaigning politicians would be looking for votes in Brampton. He attempted to pass a motion to refer Dhillon’s motion to be studied by a transit committee, but that was rejected in a 6-5 vote.

The mayor was adamant that he didn’t want to go sell a project to the province or federal government that was made by such a divisive vote; he wanted to go with a “unity position”. Brown asked if the motion could be amended to allow a ‘tunneling option’ for the Main Street LRT, but Dhillon believed his motion already implied that option would be on the table.

After what ended up to be a 40 minute recess because the mayor had to attend a brief function, council reconvened and added an amendment according to Brown’s wishes to refer studying the LRT on Main to “include studying and considering an underground tunneling option,” Brampton councillors unanimously passed Dhillon’s motion.

As for the political side of things, Patrick Brown may be Brampton’s new mayor, but when it comes to transit policy in the city, it looks like the hand of former mayor Linda Jeffrey is still at play. The six councillors who sided with Dhillon were either endorsed by Jeffrey during the campaign or sided with her the majority of the time in the last council.

This ‘bloc of six’ had already flexed their political muscle the day before, when Santos was appointed as the seventh additonal regional councillor to Peel Region over Bowman, who was one of those who previously butted heads with Jeffrey, and newcomer Williams.

Expect more decisions in the future seeing this ‘bloc’ mostly voting on the same side.

Doug Ford’s government has been rather coy about the future of the Hurontario LRT to the point where rumours that the province will just cancel the project outright have been proliferating. The provincial government’s own response has not helped in quelling those rumours. Perhaps Brown’s gambit that with a federal election in 2019, he may indeed extract better promises from politicians looking to come to Brampton for votes.

For those of you who believe in the LRT, you can take away from the notion that Ford has indicated he respects democracy. One example is in Hamilton, where incumbent mayor Fred Eisenberger, who is also in favour of LRT in that city, was overwhelmingly re-elected with 54 per cent of the vote. The premier said he respects the will of voters; the voters chose the pro-LRT candidate, therefore the LRT should move forward.

Since Mississauga’s Bonnie Crombie was re-elected with 76 per cent of the vote, and she’s one of the most vocal proponents of the Hurontario LRT, the logic is Ford will respect the wishes of voters here as well. Based on that logic, Brown’s position of getting something better than the original LRT arrangement has more legs, since he won the election and some of Brampton’s other mayoral contenders also said the same thing Brown did about getting a better transit deal from the province.

It will be interesting to see in the next year or so what kind of transit plan emerges. Will we indeed see a revived vision for an LRT going to not only downtown Brampton, but all the way to Caledon? Or will be see something better as Mayor Brown said the city should be getting?