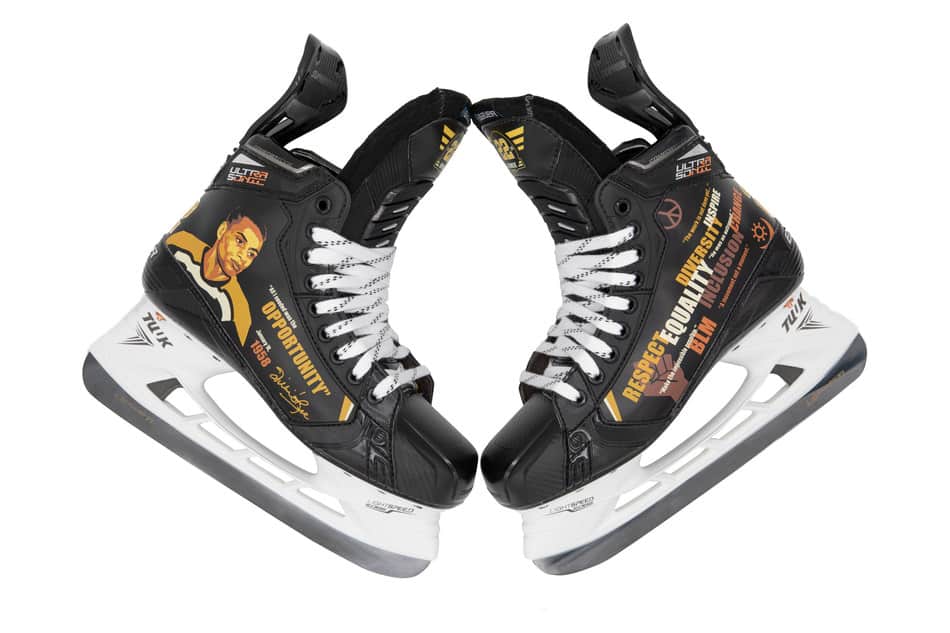 Bauer Hockey unveiled a new pair of skates with a custom graphic celebrating the achievements and life of Willie O’Ree, the first Black player to play in the NHL.

The skates also include several phrases related to the racial equality movement many sports leagues have been championing.

“Through the creation of these special skates to honor Willie O’Ree, Bauer Hockey is powerfully representing the inclusive values that make our game and our world better,” Kim Davis, NHL Senior executive vice president of Social Impact, Growth Initiatives, and Legislative Affairs, said in a news release.

“We are proud to have worked with Bauer on this project, which adds to the month-long celebration of Black History while also demonstrating our belief that inclusion is a year-round sport—by using the skates to raise money for ongoing grassroots diversity and inclusion efforts in hockey,” she continued.

The graphic on the skates was designed by Terry Smith of Terry Smith Creations, with help from pro hockey players Wayne Simmonds and J.T. Brown, and Eustace King, an NHLPA agent and Managing Partner of O2K Sports Management.

“I think of Willie O’Ree like an astronaut,” Toronto Maple Leaf Wayne Simmonds said in the same release.

“He was a trailblazer as a player and off the ice his role as an ambassador continues to welcome new players and families to our game. It’s been an honor for me to participate in creating this skate, and I can’t wait to wear it on the ice,” he continued.

They’ll be worn by several players during games in February.

O’Ree was inducted into the Hockey Hall of Fame in 2018, and he first played in an NHL game in 1958 for the Boston Bruins.

“It’s such an honor for the BAUER team to play a role in highlighting this historic milestone and elevating the voices of our athletes. It’s a recognition of the barriers Willie O’Ree broke down in 1958, as well as his life of service as one of the best ambassadors our game has ever seen,” Ed Kinnaly, CEO of Peak Achievement Athletics, which owns Bauer Hockey, said in the release.

“On and off the ice, Willie’s contributions have helped grow our game and make it even more inclusive and welcoming for everyone,” he continued.

Game-worn skates will be sold through the NHL’s auction program, and all of the proceeds will be going to the Black Girl Hockey Club, a non-profit dedicated to uniting Black women in the hockey community and making the game more welcoming.

“The Black Girl Hockey Club is proud to be the recipient of this very generous donation from Bauer and Mr. O’Ree that will allow us to continue our work in building a space for Black women in hockey through programs like our scholarship fund and community learning events,” Renee Hess, executive director of the Black Girl Hockey Club, said in the release.

“Willie O’Ree continues to inspire generations of hockey fans with his tenacity and love of the game, and BGHC is excited to uphold his legacy with our work,” she continued.