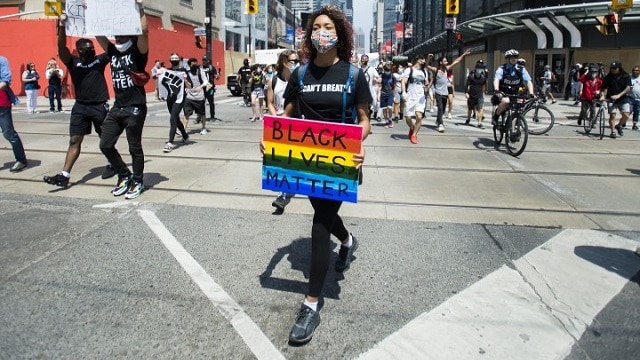 TORONTO — Hundreds of anti-racism demonstrators took a knee in silence outside a downtown Toronto courthouse Saturday, with another large group doing the same in a park to the west, amid several events across Canada protesting violence against black people.

The two Toronto rallies, marching to various areas of the city, are the latest in a series of protests following the release of a video showing a white Minneapolis police officer kneeling on the neck of a black man, George Floyd, for nearly nine minutes.

Floyd fell still and died, the officer’s knee still on him.

At one of two demonstrations in Toronto, cars honked in support as they passed the people kneeling outside of the Superior courthouse and the U.S. consulate, which are across the street from each other.

The protesters marched up University Avenue, where people held signs saying “black lives matter,” “stop killing us” and “no justice, no peace.”

Jay Smith, who attended the demonstration with his young son, said he wants to see police reform and more transparency as a result of the protests.

“It’s important for…my son to see that people support us in terms of justice, in terms of equality, to stop police brutality,” said Smith, who added he’s glad the protests are continuing from last week.

“If it does stop, no one will pay attention and it’ll fizzle out into nothing.”

Shay Hamilton said she wants the momentum to continue.

“It’s just very important for us to be here because we are an interracial couple and we do believe in unity,” said Hamilton, a black woman who was protesting with her white partner.

Toronto Police Insp. Matt Moyer took a knee with the demonstrators and said it was emotional.

Video footage from Nathan Phillips Square outside city hall, where the group began its demonstration, showed police escorting a man in blackface away from the crowd.

A separate group of hundreds of protesters took a knee with their fists held in the air in Trinity Bellwoods Park, to the west of Toronto’s downtown, and planned to march to the Ontario legislature.

“We can’t let go of this energy,” he said. “They are our future. They’ve been watching us. They’ve seen things that they haven’t liked. All of this incremental change, there has to be big change…We’ve got to get it right.”

The two protests followed another event on Friday that drew thousands of demonstrators, who marched peacefully to city hall chanting “black lives matter” and “I can’t breathe.”

Toronto Mayor John Tory said that he was glad Friday’s event was peaceful and hoped Saturday’s would be as well.

“The message from those protesters is we simply have to involve every person and every effort to wipe out anti-black racism, anti-Indigenous racism, racism and discrimination of any kind in this city, and make it the most inclusive city in the world,” he said Saturday.

“That’s the message that has been heard loud and clear.”

Events were also planned in several other Ontario cities including Niagara Falls, where the Whirlpool Bridge to the United States will close Saturday to all but essential traffic so demonstrators can protest.

In St. John’s, N.L., VOCM radio reported that a crowd of several thousand people gathered for a Black Lives Matter Rally at Confederation Building during the afternoon.

Video of the event showed the crowd gathered in front of the legislature and on steps leading up to the building, as they chanted “black lives matter,” to the beat of three drummers.

Meanwhile, organizers of a Montreal event scheduled for Sunday told police today they were rescinding an invitation to police chief Sylvain Caron to attend after some groups opposed his presence.

Montreal police say in a statement posted to social media they respect the organizers’ decision and it doesn’t change commitments the force has made to review measures when it comes to street checks.

Toronto’s chief medical officer of health, Dr. Eileen de Villa, noted Friday that there are risks associated with demonstrating during the COVID-19 pandemic, and encouraged participants to take extra precautions.

She said protesters should make sure they maintain a two-metre physical distance with one another, and wear a mask or other face coverings if that’s not possible.

De Villa also said protesters should carry signs and drums rather than shouting to minimize droplets in the air that could potentially spread the virus.