A Mississauga Firefighter Helping in Fort McMurray & How You Can Help 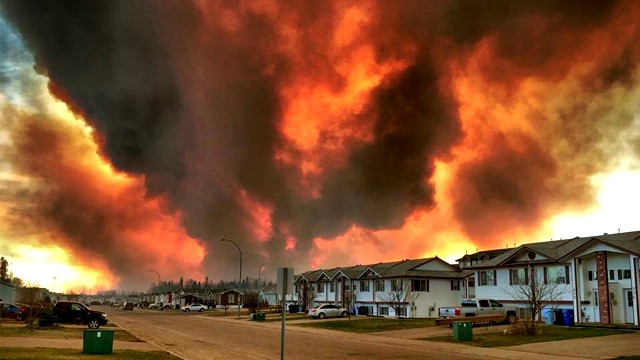 The biggest wildfire in Alberta’s history has displaced tens of thousands of residents and people from all over Canada — even the world — have offered to help evacuees deal with the devastating loss of their homes and possessions.

According to a recent CityNews article, a Mississauga man is doing his part to control the blaze.

CityNews reports that 21-year-old Jason Munro had only been working for the Fort McMurray Fire Department as a firefighter for a month when he was called upon to help contain the historical fire. Munro was living with girlfriend Emily Medeiros in the affected area before the fire broke out and neither she nor his Mississauga-based family have heard much from him since May 1. That said, intermittent text messages have assured them that he is alive and well.

“They don’t consider themselves heroes, they keep rejecting it, but they are our heroes,” she told CityNews. “They’re the only thing left saving our towns.”

While it might not be feasible for other Mississauga residents to head to Fort Mac to help battle the flames, there are things they can do to show their care and support during this difficult time.

If you donate to The Red Cross, the federal government will match your donation.

Also, a recent CBC article points out that other, smaller organizations could also use some support. Some of those organizations include:

– The United Way of Fort McMurray

For another list of local charities helping victims, check out Charity Intelligence Canada. Some of the smaller charities are specifically dedicated to providing transitional housing, assisting seniors, helping youth and caring for animals affected by the blaze.