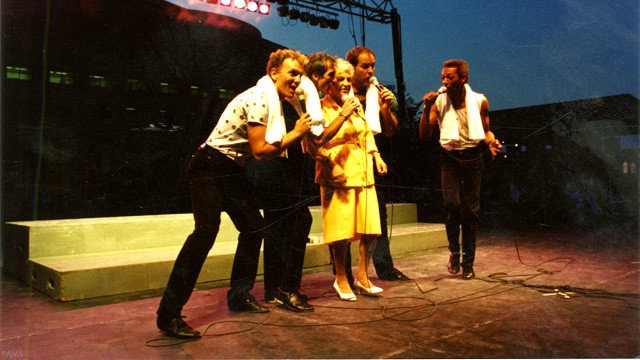 Here are some photos of Hazel McCallions at the official opening of the Mississauga City Hall in 1987 with the The Duke and Duchess of York to singing with The Nylons and more.

All photo’s are courtesy of PAMA. (Peel Art Gallery Museum and Archives) The Duke and Duchess of York, photographed after finishing their tour of the Art Gallery of Mississauga. Duke of York Boulevard, running between Square One and Mississauga’s Civic Centre. New Wave group Images in Vogue (“In the House”) meet with Hazel. Officials fromKariya,Japanvisit with Hazel, to present gift in celebration of the new municipal offices. The two cities have been “sistered” since 1981. Hazel performs with a cappella group The Nylons. A peace walk passed through the city centre during the weekend, each member of the group presenting a rose to Hazel.

All photo’s are courtesy of PAMA. (Peel Art Gallery Museum and Archives)