Your Feedback is Needed for Public Art in New Mississauga Park

As Mississauga sees a massive wave of new developments coming into the nascent downtown core, some people might be worried that the uniformity of such developments (although plans like M City do offer some innovative architectural designs) might rob the evolving area colloquially known as ‘Downtown Mississauga’ of some personality and distinctiveness that people inherently crave.

But there is some light coming over the horizon, in the form of proposals for public art to be installed on a piece of land slated to become a park, adjacent to some new developments just a few blocks away from Celebration Square.

This new park is called Zonta Meadows Linear Park. If you drive down Rathburn Road west of Confederation, you may notice on your left the currently existing Zonta Meadows Park. But just south of Zonta Meadows is a narrow strip of park land nested between the new townhouses at 4020 Parkside Village Drive and Wallenberg Crescent, as shown in the map below:

It is in this narrow space that the new Zonta Meadows Linear Park will host city commissioned public art from an experienced artist or artistic team. According to the City of Mississauga, the project is fully funded by Amacon Development Corporation as part of the developer’s contribution to the city’s Public Arts Program.

Mississauga’s total budget allocated for the artwork is $140,000. It’s also important to note that 20 per cent has already been set aside by the City for the future maintenance of the artwork and for construction contingency.

The various proposals for public art can be seen in this presentation, but here is a brief outline of the various artistic proposals being put forward: 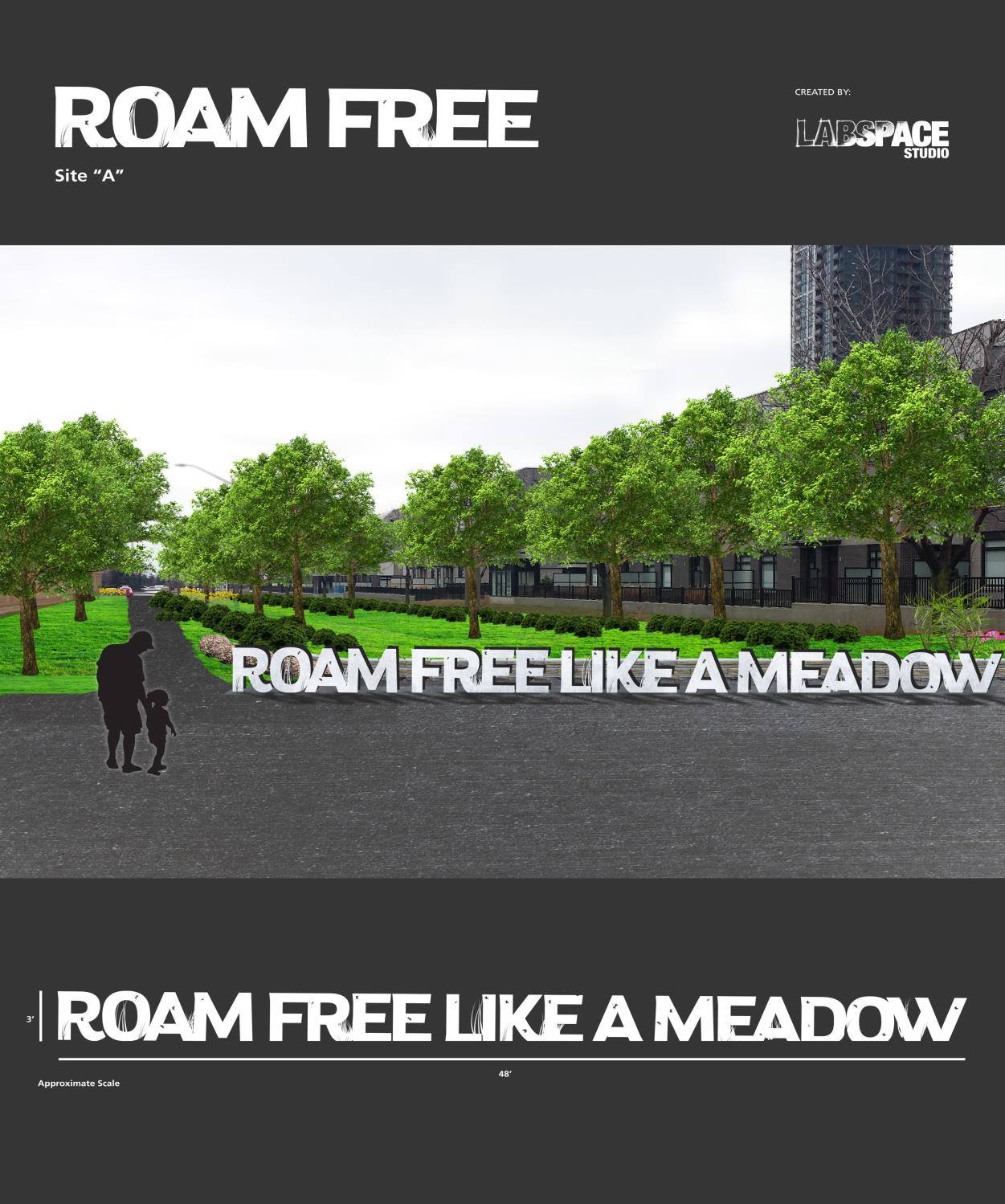 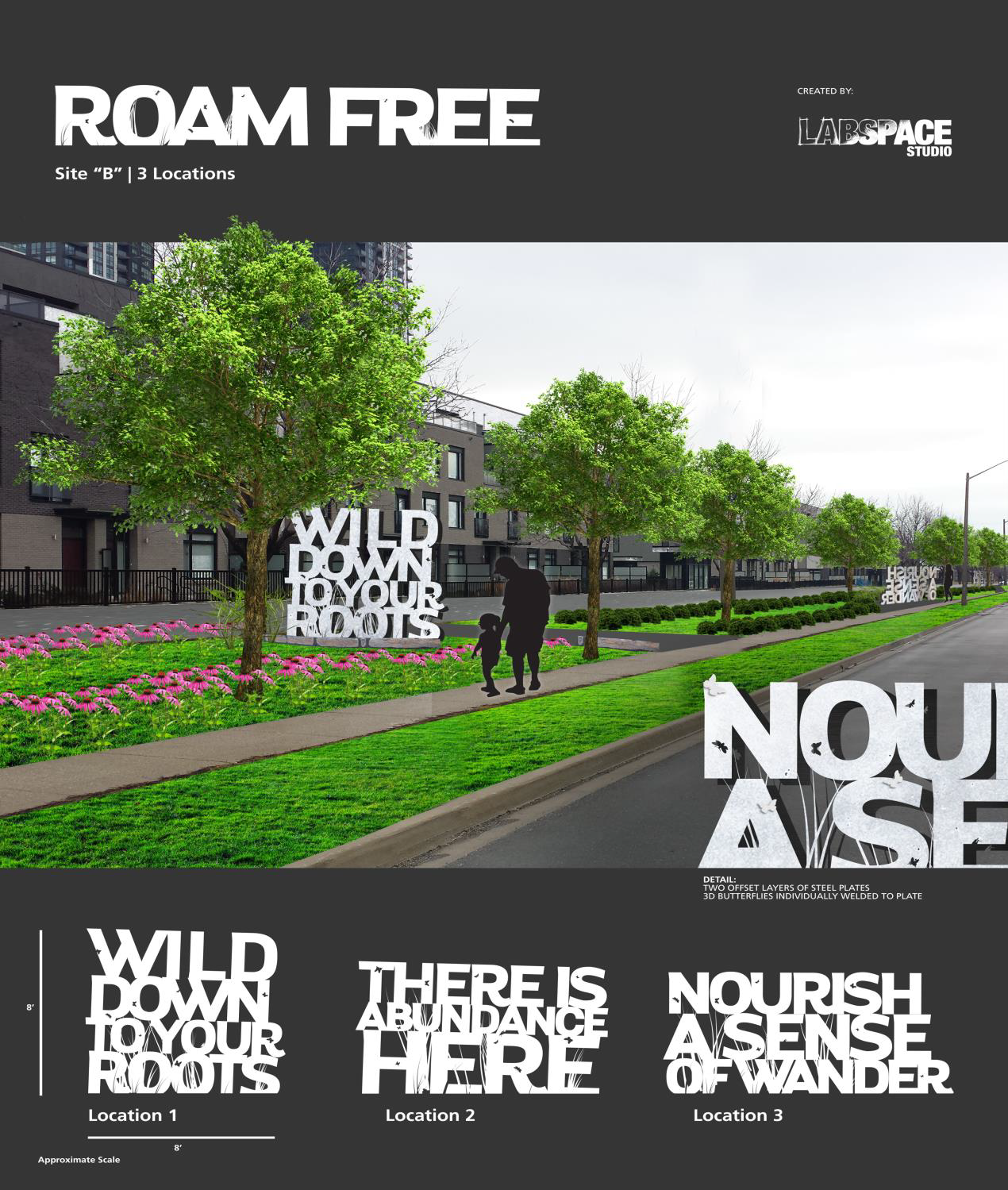 According to the artists, “Roam Free” is an integrated series of text-based artwork designed to reference and respond to the unique ecological features and landscaping design of Zonta Meadows Linear Park. Inspired by the tactile and sensory energy of a wild meadow, “Roam Free” combines evocative text and imagery to encourage ‘exploration’ and ‘self-discovery’ within the park and adjoining trail system.

This seems reminiscent of the big TORONTO sign at Nathan Phillip’s Square in downtown Toronto, or the LOVE sign seen at the Distillery District. While these examples use mainly one word to help convey something to a visitor, the “Roam Free” proposal is somewhat more elaborate, almost an attempt to foster a dialogue in terms of describing what you’re suppose to feel when you walk through a meadow.

“Coyote coyote” by Metz and Chew 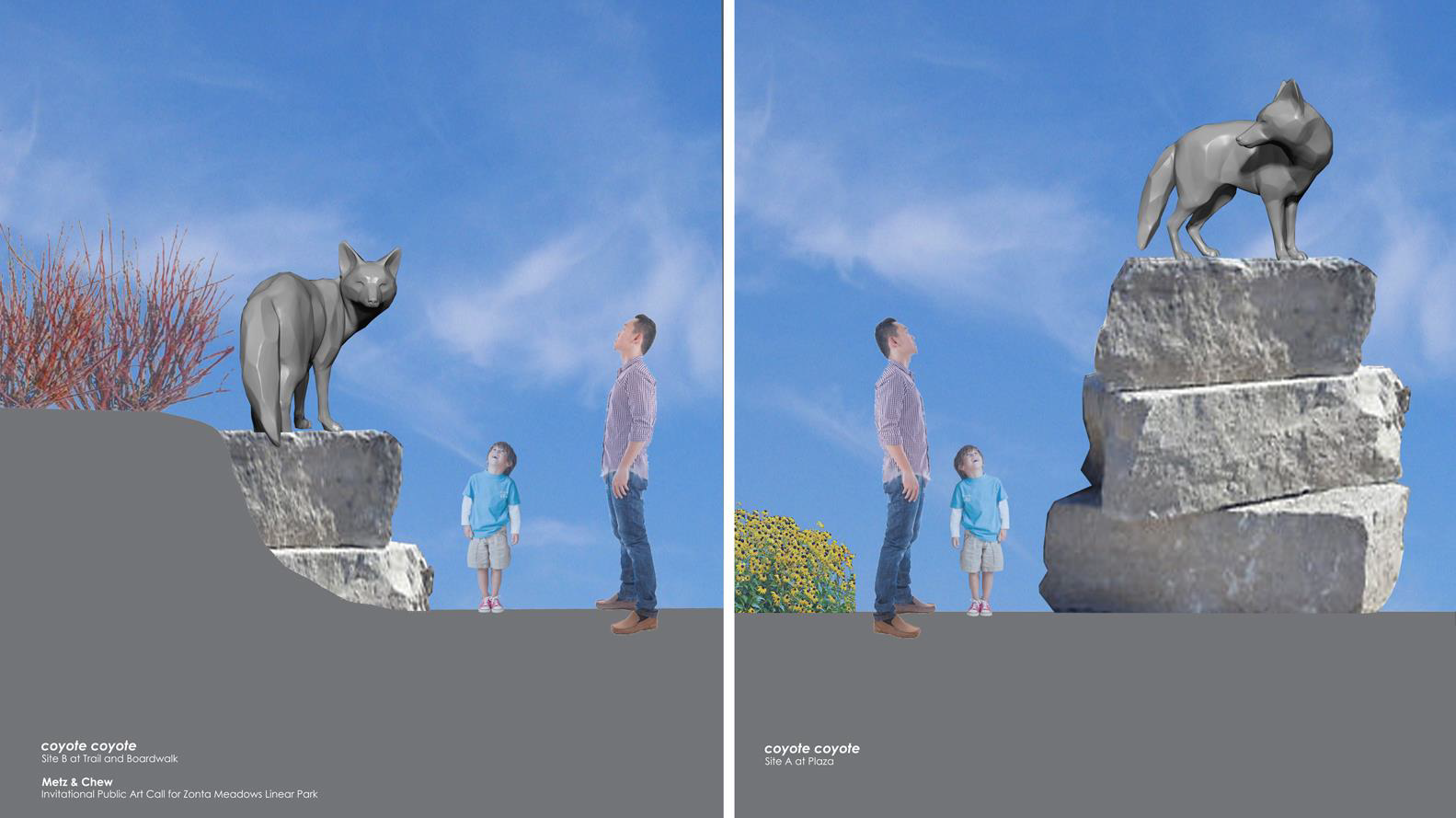 The artist’s explanation that this piece is a reflection on landscape and identity, and how we as a society mythologized the world around us. They thought about the landscapes of the Mississauga area and the animals that inhabit them, such as the coyote, an animal  that has been moving through this landscape - whether the land was natural, cultivated, or urban, for millennia.

No doubt coyotes have been on the minds of Mississauga residents lately. Back in February we reported that someone’s dog was attacked by a wild coyote while walking in the park. The city Mississauga has put out guidelines for people on what to do to avoid encountering coyotes and hosted public information sessions.

Don’t get me wrong, the coyotes look like they are very well sculpted and look authentic. But with all the issues with coyotes in Mississauga lately, it seems like awkward timing to erect visual reminders of said coyotes. 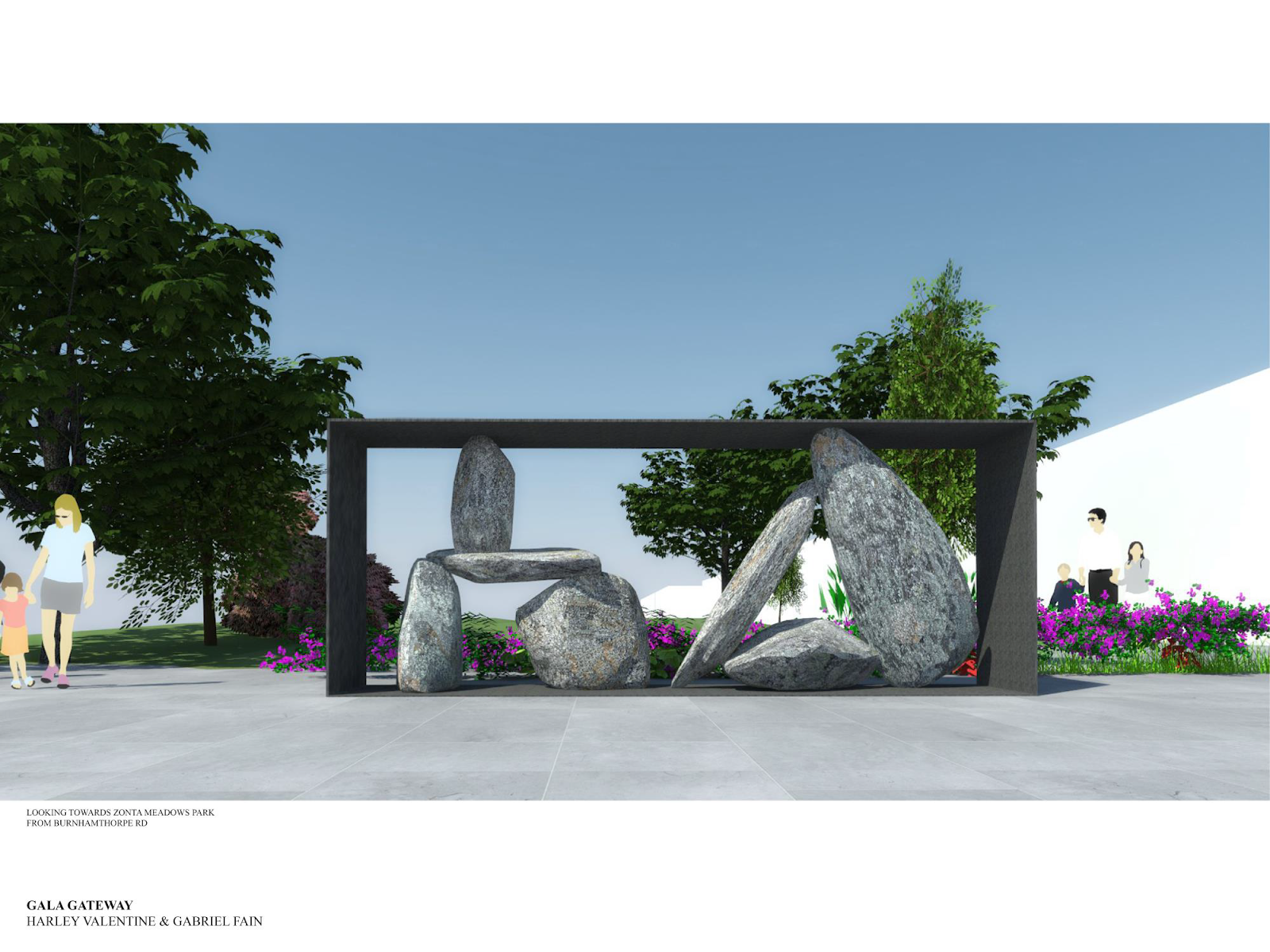 The first location with the arranged stone formation functions as a symbolic gateway and strategically frames the view of the Gala Procession and the rest of the park. The sculpture creates a dialogue with nature exploring materials both rough and smooth, hard and soft, heavy and light. The whole sculpture invites the public to touch and smell the work and gives children the opportunity to safely occupy the space beneath and around the stones. The artists also mention that inspired by the dynamism of the performing arts, ‘Gala Procession’ appears rigid and robust while maintaining a delicate balance and weightlessness referenced in the discipline of ballet. This modernist juxtaposition of structural steel layered against the natural elements of the park creates a striking dialogue emblematic of man vs. nature. 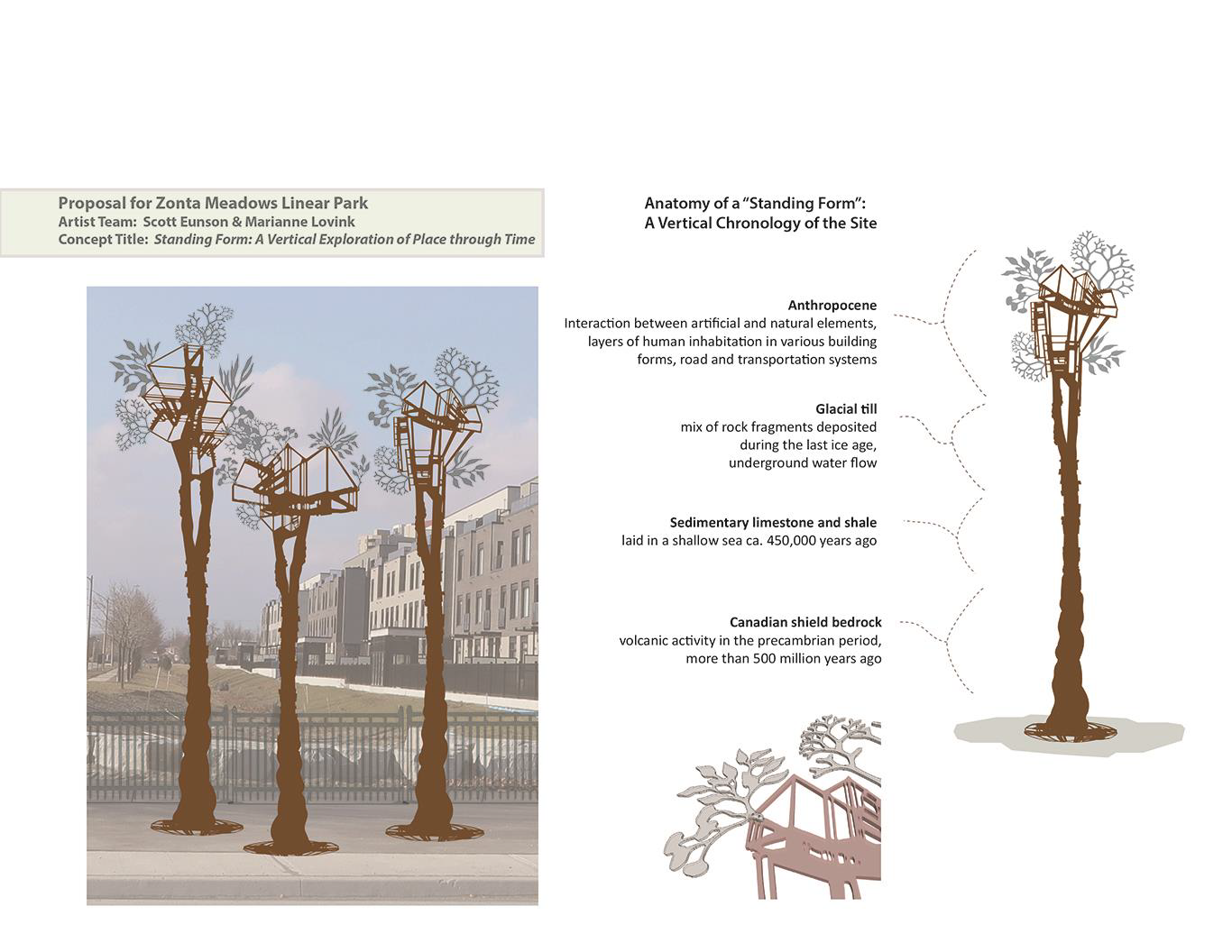 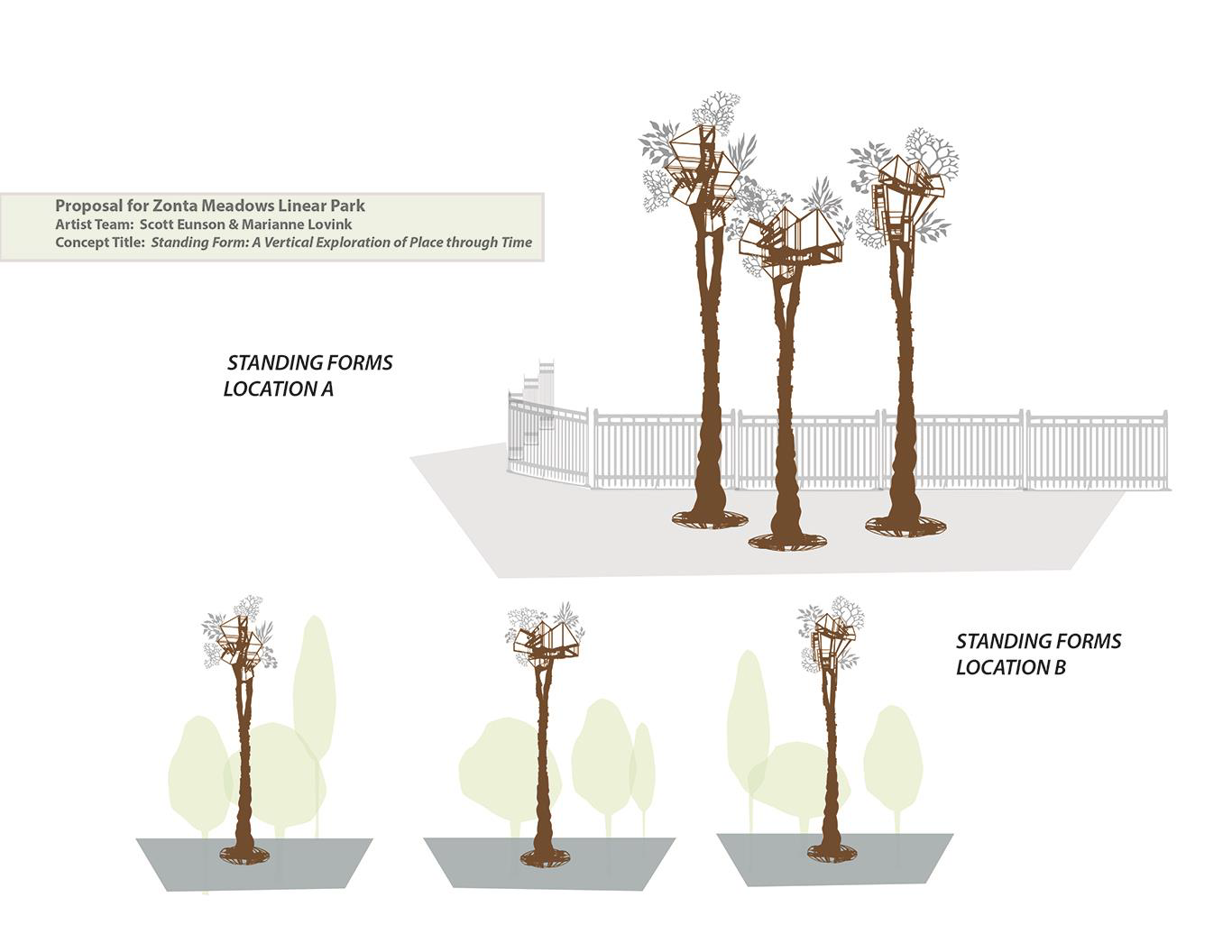 The artists for these artificial trees proposes that they will create a sense of community and identity through its place-making, integrates well with the architectural landscape design of the site, takes into account historical, environmental and social issues, will highlight and celebrate the greenway and support the notion of ‘green living’, and provide equal visual interest for both pedestrian viewers as well as those passing by in their cars. The artists were very confident that their proposal will enhance the Zonta Meadows redevelopment and raise awareness of the important role of public art in urban environments.

Deadline for feedback on the online survey is this coming Friday, April 28. Or you email questions about the survey or any additional feedback to public [dot] art [at] mississauga [dot] ca

I’m not sure about the coyotes based on the previously stated reasons, but again this is not a knock on them for not being well sculpted and authentically looking like coyotes as they’re supposed to. The “Roam Free” giant lettering seems more suited to a larger public space like Celebration Square than a narrow stripe of parkland. So in my opinion, either of the latter two seems the most appropriate to conform into the natural environment so they look like they fit better in a natural environment the image the park is looking to project.

But in any case, any sort of public art around Mississauga goes a long way to washing away the bland suburban image this city has long been associated for.