Young Sauga Artists in the “Limelight” 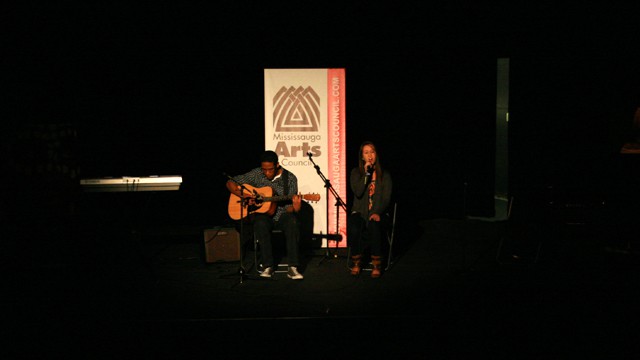 On Friday, January 27th, 2012, Limelight, a Mississauga-based youth arts organization, which is associated with the Mississauga Arts Council, held an open mic event at the Maja Prentice Theatre. I was able attend, and as a crowd member, I took in, first hand, the fruits of the organization’s labour over the past few months in putting the event together.

All in all, the evening was a success. The event started out with introductions of the Limelight staff and board, some of whom also perfomed on stage, and continued with artists from various disciplines and genres such as spoken word, hip hop, vocalists, solo guitarists and bands.

At first, the theatre was about half full, primarily consisting of supportive parents and friends of those on stage. But as the night progressed and the nerves started to settle, and the on-lookers figured out that the event was all about support, the list of names waiting to get on stage grew and the crowd grew with it. The teens in attendence, I’m sure, were texting their friends thoughout the evening and letting them know that the night was turning out to be worthwhile.

These talent showcases are a reliable form of entertainment for the average fan of the arts, in general. Even if the skill isn’t necessarily world class yet, the passion and joy of the performance is palpable, which makes enjoying and appreciating the bravery of the young artists very easy to do.

Of the 30 performers, a few stood out and received rousing applause from those in attendance. The rapper, Cypher, who can’t be any older than 17 or 18, had the crowd participating in an original rap he wrote about being a shy kid in school who eventually gets the girl who he was pining after. Shelby Anceriz, another stand out, had to sing a capella after the theatre’s audio system was unable to play the CD that she had brought.  The crowd was sympathetic due to a few mis-starts, but she made up for it with an amazing rendition of Adele’s “Someone Like You” (Adele was a popular choice for the night). Probably the loudest cheer of the night went to Kyle Fraser, a finger-picking guitarist who captivated the crowd with an original piece. He used every square inch of that guitar to combine percussion elements along with picking and strumming. He found his groove and left the audience wanting more. The night, in general, could have benefited from a dry run or dress rehearsal to work out some technical kinks, and one of the MC’s could have used a lesson or two in what to say or not say in front of a crowd, but I’m sure all of that will be worked out with time.

The key point to highlight here is the invaluable resource that Limelight is, and hopefully, will continue to be for young artists looking to share and refine their talent, meet artists their own age and foster relationships with other like-minded individuals.

I know that for myself, as a young artist interested in poetry and performing arts growing up over ten years ago in Mississauga, an organization such as Limelight would have been awesome to have around. I did not realize my passion at a young enough age to apply to an arts school like Cawthra Park, so I ended up hanging around the drama room during most of my free time in high school and looking forward to the yearly “Arts Night” that we would put on.

With Limelight now around, “Arts Night” doesn’t have to be a once a year event. Although, as an aspiring artist, I did accept the yearly event years ago, I’m quite sure that Limelight is well appreciated by the young artists sprouting out all over this city as Mississauga’s culture grows – from Erin Mills, to Malton, and everywhere in between. If you are a young artist take advantage of Limelight, I know I would have.