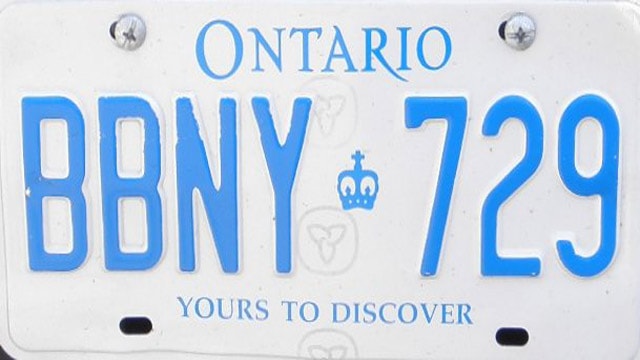 Is your license plate blistering and fading and peeling?

If it is, you’re not alone—and you’re on the hook for a $40 replacement fee.

Earlier this week, CityNews released a video segment detailing the annoyances drivers with degraded license plates are facing in Ontario.

Basically, the province is aware (and, according to CityNews, has been since 2012) that hundreds of thousands of license plates are poorly manufactured and vulnerable to peeling, bubbling and corroding, but is not planning to launch a recall or compensate drivers for replacement costs.

If your plate is damaged and five or more years old, you have to pay the Ministry of Transportation $40 for a new one. If you decide to drive around with a degraded plate, you could end facing a $120 fine (ouch).

As for why the plates are damaged, an inadequate manufacturing process is to blame.

According to CityNews, inmates at the Central East Correctional Centre in Lindsay, Ontario make the defective plates on behalf of Trilcor Industries. City reports that with more than 130,000 returned plates since 2014, the province hired the National Research Council to study the creation process. The news outlet obtained its analysis through a freedom of information request and found out that the council recommended that Trilcor review its lamination process, slow down the rolling process, apply less pressure or make a new procedure to allow air to be removed as the roller is moving forward.

There’s controversy over whether or not the process has been adequately altered.

So while $40 isn’t terribly steep (although could be a lot for some people), it’s certainly better than $120.

The solution to the problem isn’t ideal, but there you have it — if your plate is degrading and is five or more years old, you must replace it yourself and cover the costs.