You Don’t Have to Pay Some Parking Tickets in Brampton 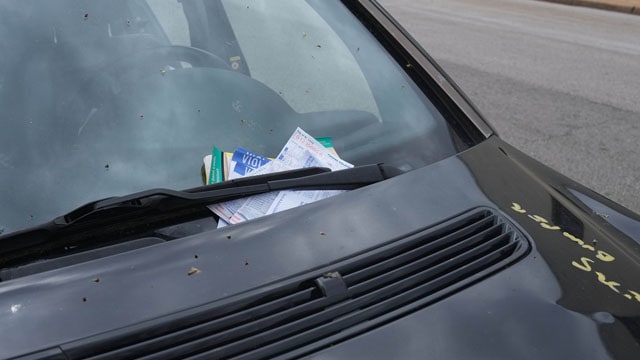 Have you ever seen a ticket for a seemingly unreasonable sum plastered to your windshield after failing to pay–or failing to pay enough–in a private parking lot in Brampton?

Have you ever seen a ticket for a seemingly unreasonable sum plastered to your windshield after failing to pay–or failing to pay enough–in a private parking lot in Brampton?

It may look like a traditional municipal parking ticket, but if it was distributed by a private parking company, you might not have to pay it.

According to a recent CBC article, you are under no real obligation to pay a ticket distributed by a private parking company–say, Precise ParkLink or Impark–because there’s really not much they can do to you if you don’t. It’s in no way comparable to a municipal ticket (which you must pay in order to renew your license or to avoid screwing up your credit) and–and not everyone knows this–does not have to be treated as such.

We know, we know–you’re savvy and aware and already knew you didn’t have to honor certain parking “tickets.” That said, there are still people who are unaware that they might not have to honor that sizeable charge levied by a private parking company.

According to the CBC, Precise ParkLink rakes in more than $600 million a year and Impark runs more than 400,000 parking spots across 3,400 lots in 100 North American cities. The companies are known for invoicing drivers for somewhat wild sums when their lot “rules” are broken.

While these tickets look like a lot like municipal parking infraction notices (which are important and should be honored or, if necessarily, legally disputed through the proper channels), they are not.

You can, in fact, dispose of one should you receive it.

“It’s not a parking ticket,” Toronto lawyer John Weingust told The CBC. “They’re issuing tickets that look like the same as the [real ones]. People think it’s from the city … and they get frightened of it and they pay it.”

According to the article, the companies can (and do) get tough with customers who don’t want to pay. The CBC reports that one customer who disputed his ParkLink ticket was told it would go to collections and that the agency would tow his vehicle. The company also said it would cost him $10 just to dispute the invoice.

Although Weingust told The CBC that it is true that the bill may be sent to collections, he added that that still won’t endanger a customer’s credit rating–even if the agency decides to take the customer to small claims court (which is an unlikely outcome to begin with).

Although it makes sense for companies to charge for parking on private lots, it doesn’t appear these companies have much of a leg to stand on when they attempt to intimidate people into paying–in many cases–unreasonable sums.

So, Brampton, pay for parking when you need to–but don’t feel obligated to fork over $75 if your ticket slips off your dash or your lunch meeting or dentist appointment goes longer than expected.