York-Durham Heritage Railway back on track in Uxbridge 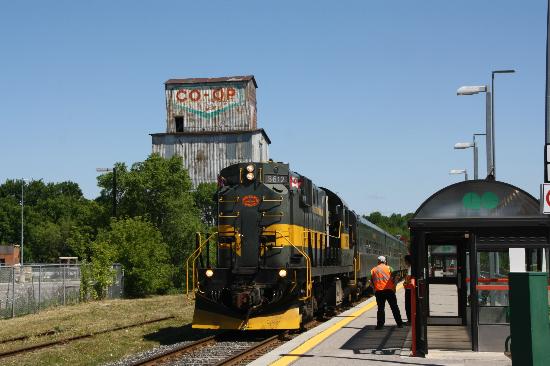 Tourists and residents can once again take a trip back in time with the York-Durham Heritage Railway.

Now that we are in Step 3of the Province’s re-opening plan and tourist sites are re-opening (with capacity restrictions), the York-Durham Heritage Railway – one of the top tourist attractions in north Durham and York Region – is back on track and ready to go.

You can ride on one of the non-profit Railway’s vintage Pullman coaches or cafe cars through the scenic Oak Ridges Moraine between Uxbridge and Stouffville, with shorter trips on some weekends.

High tea on the train in a popular option, and a five-course, fine dining option has been added this year as well. There are also family trains, and kiddie-themed trains such as Day out With Thomas, Winnie Festival, Halloween, and Santa.

The trains run on the Stouffville-Uxbridge line, which was built in the 1860s by William Gooderham to carry grain to his Toronto distillery.

In 1920 the line was transferred to Canadian National Railway and over the years sections of the line were decommissioned. By 1996, the York-Durham Heritage Railway reopened the line between Uxbridge and Stouffville to offer heritage train rides to the public.

The York-Durham Heritage Railway Association is a non-profit with a mandate to preserve and promote the heritage of Canadian railways of South-Central Ontario.