Would You Like to See Wi-Fi on MiWay Buses? 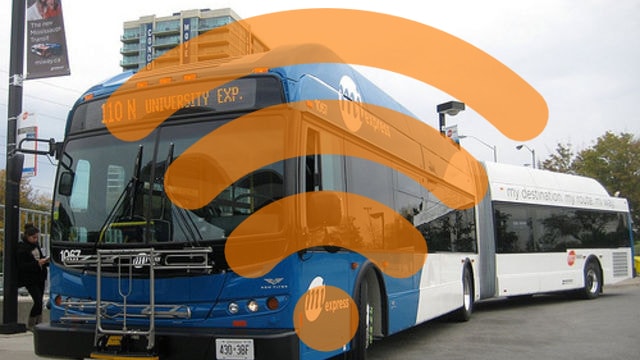 I am a big proponent of Wi-Fi. In the last election, one of the mayoral candidates proposed giving free Wi-Fi to the entire City of Mississauga, and I thought it was a swell idea.

In reality, the infrastructure needed to do so would be complex and the costs would be hefty. That said, there is a good network around Mississauga if you know where to look.

Mississauga Civic Centre, Celebration Square, all the libraries and community centres have Wi-Fi hotspots and they all work decently well for the most part.

But as I used the Mississauga Transitway this week to get home from work, I noticed that while the Transitway stations are equipped with the city’s Wi-Fi, the buses themselves are not. As a resident and service user, that does bother me a bit. What if I don’t have data on my phone plan and need to check the latest bus schedules?

Let’s take a look at some other bus services, whether they be from other cities or private companies, that offer Wi-Fi on their public transit buses.

Montreal, Quebec
The city of Montreal first rolled out a pilot program with Wi-Fi on special buses in 2014. It was available on three buses. Since then, the service has expanded. One of the routes that Wi-Fi is available on is Route 747, which runs from Pierre Trudeau Airport to downtown Montreal, which is quite convenient for travelers who just got off the plane and need to keep track of messages or emails that came during their flight or to track where they are staying.

GO Transit
The provincial transit agency has been experimenting with Wi-Fi in their stations on some GO buses and the Union Pearson Express but have held back on implementation on GO Trains due to a number of reasons, chief among which are technical issues, low quality service and the need to install substantial infrastructure changes to the existing GO trains. The cost of a retrofit would probably be too much to budget for, considering all the other enhancements planned such as rail electrification, which are more important.

Seoul, South Korea
I may have never been there, but I am convinced South Korea stepped into a time machine and fast forwarded their entire society 20 or even 30 years ahead of the Western world. They have already installed Wi-Fi on their buses, taxis and subway trains, but now they’re looking to expand it to pretty much all of the city, from every street corner to available open space. That’s some bold initiative, and I expect nothing less from a place like South Korea.

Malaysia
Another example of an Asian country showing up the west, Malaysia began implementing Wi-Fi services on its public transit vehicles last year — on their own BRT system, no less. From the pictures and images provided, it looks like something that would be cool to ride on.

The last two examples are a wee bit outside our jurisdiction, so let me bring it back closer to home…

Some American Examples
There are too many to list in one paragraph, but here are some US jurisdictions that have Wi-Fi on their bus fleets. And the last example on this list is the one I mention just right below:

Mega Bus/Safeway Tours/Greyhound
I have seen enough Safeway Tour buses, and been on a few myself, around Mississauga to see the giant ‘Free Wi-Fi’ signage on the side of all their buses. Factoring in signal strength, Wi-Fi on tour buses like Safeway and Mega Bus works pretty well. From an average person’s standpoint, they might be wondering, “if a company like a tour bus fleet can install Wi-Fi services on all the U.S. and Canadian vehicles like Safeway, why can’t the city’s own bus fleet do the same?”

One reason is there just is not enough available space on buses to accommodate Wi-Fi infrastructure along with other tech, such as the computer and power systems that control the bus, the destination signage, the communications system, the CCTV and the GPS. You wouldn’t think at first glance about all this equipment, but it’s there. But if GO Transit can bring out double decker buses nowadays, perhaps in the future MiWay can revolutionize their own bus fleets into something more modern that could accommodate additional technology on board.

That would mean phasing out existing older models of buses that were around a decade old but are still in good working condition. And the balancing of the immediate needs over retrofitting buses for the long term which is years down the road. It would be hard to justify having Wi-Fi on some buses and not on others. My suggestion would be perhaps to start at a specific route, perhaps on buses that move along the Transitway or on the buses that run on the express routes.

If we are talking about building a more modern, connected city, accessible Wi-Fi services when citizens are riding the bus would be a reasonable area to start looking into.