Worst Intersection in Mississauga Getting Redesigned 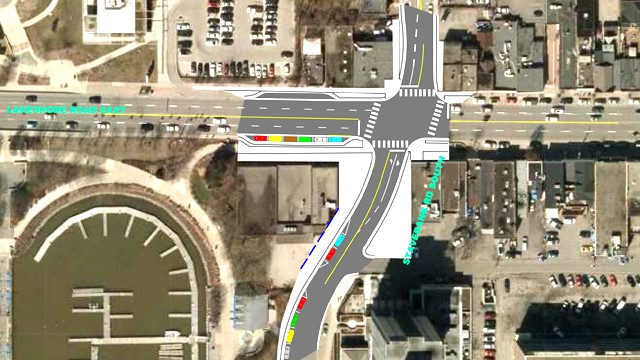 On September 24, 2015 Mayor Crombie, former Mayor McCallion and Councillor Tovey spoke at the announcement at the Waterside Inn. They were there to attend the ground breaking ceremony for the redevelopment and straightening of Stavebank Road in front of the Port Credit Post Office.

In Mississauga, the car is king. While we’re one of the biggest cities in the country, our disparate hubs are far apart and, sometimes, the bus just doesn’t cut it. Read more

There are many components required to achieve the re-alignment of the intersection Stavebank and Lakeshore intersection.  It has been a four year process to get to the point where construction on the Post Office portion can start next week.

inRumours: Café Diplomatico May Be Coming to Mississauga

First, the sorting room section of the Post Office will be torn down and replaced with a new glass addition with much needed office space for Port Credit. Two levels of underground parking are included with the development. The historic portion of the Post Office, built in 1923 will be preserved.

Once completed, CIBC, located on the south-east corner of the intersection, will re-locate into the Post Office site. The final step will be to tear down the old CIBC building, allowing the City of Mississauga to re-align the intersection.

Do you think this will fix the problem?