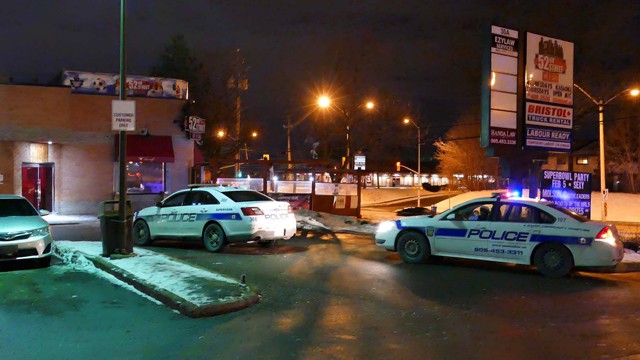 Peel police are appealing to the public for help in locating five female suspects who are wanted in connection with a recent bar brawl in Brampton.

Peel police are appealing to the public for help in locating five female suspects who are wanted in connection with a recent bar brawl in Brampton.

On Monday, Feb. 6 at approximately 3:30 a.m., an altercation ensued at a bar in the Kennedy Road and Orenda Road area. According to police, about five female suspects got into a physical fight and a female employee was assaulted when she attempted to intervene.

The 46-year-old Toronto victim suffered serious but non-life threatening injuries after being struck by a beer bottle and was taken to local hospital.

She has since been released.

The five suspects fled the area after the incident.

The other three suspects are described as black females with medium builds.

Investigators from the 22 Division Criminal Investigation Bureau would like to speak to any witnesses who were in the area at the time of the incident or any individual who may have information on this matter.

Anyone with information regarding this incident is asked to contact investigators with the 22 Division Criminal Investigation Bureau at (905)453-2121 ext. 2233. Information may also be left anonymously by calling Peel Crime Stoppers at 1-800-222-TIPS (8477), by visiting www.peelcrimestoppers.ca, or by sending a text message to CRIMES (274637) with the word “PEEL” and then your tip.