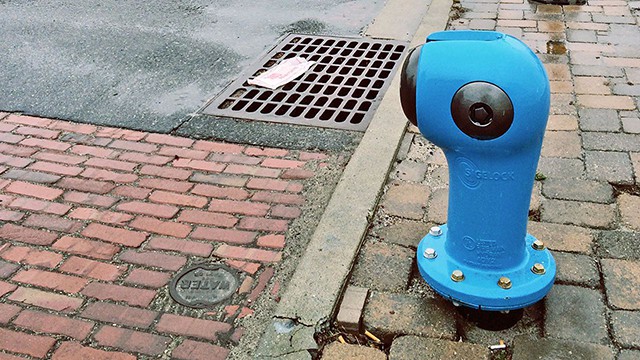 Now, however, some Mississauga fire hydrants in particular are going to be known for being a little more safe, innovative and, interestingly enough, supremely snazzy and Instagrammable.

Sigelock LLC, a water works equipment supplier based in the U.S., recently selected the Garry W Morden Centre (located on Ninth Line between Steeles and Argentia) to test its Spartan Hydrant in Canada.

The Mississauga hydrant will be the first of its kind in the country.

“People keep telling me it looks like something from another planet but there is a lot of science in the design” says Gus Khouri whose company, International Safety, has worked with the inventor to bring the Spartan to Canada. “It’s all about putting firefighters first and letting them get water on the fire in the least amount of time.”

According to International Safety, the Spartan was designed by a firefighter hoping to save lives by improving hydrants.

George Sigelakis, a retired New York City firefighter who invented the Spartan, says he lost colleagues due to faulty hydrants.

“They corrode, leak and freeze up in the winter” says Sigelakis. “They’re easy to damage and vandalize and sometimes that’s not discovered until there’s an emergency and it’s too late.”

Due to its design, builders say the Spartan is not susceptible to unauthorized access, but is simple enough for authorized access from firefighters. The hydrant is also built to function better in cold weather (of which there is plenty of in Mississauga).

“It’s all upside for the people of Mississauga” says Khouri “It’s a beautiful modern hydrant for a beautiful modern city. And there’s more to Mississauga that than just shimmering lights and pretty buildings. Their leadership clearly sees that water is a precious resource that must be protected.”

Municipal water officials will be installing the Spartan hydrant early this summer and plan to put it through rigorous testing throughout the winter.

Here’s a video with a little more info: