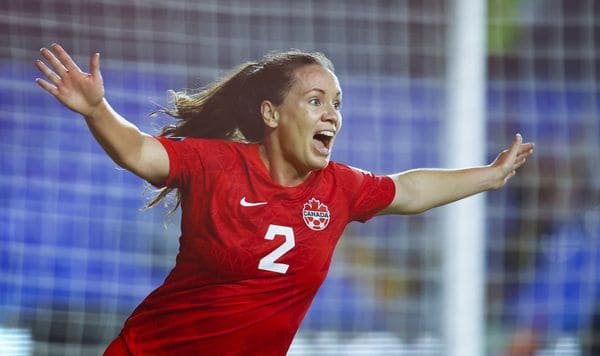 Canada will face the U.S. on Monday with Olympic qualification on the line after dispatching Jamaica 3-0 in the CONCACAF W Championship semifinal Thursday night.

Jessie Fleming scored in the first half and substitutes Allysha Chapman of Whitby and Adriana Leon added second-half goals for the Olympic champion Canadian women, setting up another showdown with the top-ranked Americans. The two North American rivals have each won four straight while not conceding a goal in reaching the championship game at the eight-team tournament.

The sixth-ranked Canadians held the upper hand all match and the score could have been more lopsided had it not been for Jamaican goalkeeper Rebecca Spencer, who plays for England’s Tottenham.

Canada gradually turned up the pressure on No. 51 Jamaica as the first half wore on, coming on in waves. The Reggae Girlz had a few moments in the Canadian end but did not manufacture chances. Canada coach Bev Priestman went to her bench early in the second half, allowing captain Christine Sinclair to have a short night.

Canada and the U.S. have met in five of the previous 10 CONCACAF women’s finals, with the U.S. winning all five. But the Canadians beat the Americans 1-0 in the Tokyo Olympic semifinal — on a Fleming penalty — en route to claiming gold last summer. The U.S. went on to win bronze.

The Canadian women won the CONCACAF tournament in 1998 and 2010, beating Mexico in the final both times. The Americans have won the other eight editions, including the last two.

All four CONCACAF W semifinalists booked their ticket to the 2023 World Cup in Australia and New Zealand by virtue of making the tournament final four. Haiti and Panama, who placed third in their respective groups, move on to a World Cup intercontinental playoff.

Canadian coach Bev Priestman was happy with the win but knows there’s more work to do.

“Three goals. Clean sheet. We’re over the moon to be in the final – but we’re not just here to take part in the final. Our goal is to win it and qualify for the Olympics at this tournament.”

Canada went ahead in the 18th minute after fullback Ashley Lawrence outpaced a defender down the left flank and sent in a cross that took a slight deflection but still made it in front of goal to Fleming. The Chelsea midfielder beat Spencer to the ball to head it in for her third of the tournament and 18th for Canada.

Nichelle Prince of Ajax almost doubled the lead in the 34th minute, but her redirection of a Jayde Riviere (Pickering) shot hit the goalpost. Quinn came close a minute later but their header flashed wide. In the 36th, Spencer made an acrobatic one-handed save to parry Fleming’s long-range shot.

Priestman sent on Jordyn Huitema, Julia Grosso, Leon and Chapman in a quadruple change in the 53rd minute.

GOAL! Adriana Leon puts in an incredible cross that is headed in perfectly by Alyssa Chapman! The substitutes link up 🔗#WeCANpic.twitter.com/USRC79O4zM

Chapman made it 2-0 with a 64th-minute header after a lung-busting run saw her get to a marvellous Leon cross from the right touchline that found the fullback at the far post. It was Chapman’s second goal in 91 Canadian appearances.

Leon padded the lead in the 76th, poking home a ball headed on by Huitema for her 24th goal for Canada.

The Canadians have had their way with the Reggae Girlz, winning all eight previous meetings while outscoring them 57-1. But Jamaica has since recruited several dual nationals and Priestman stressed prior to Thursday’s game that this was a more formidable Jamaican side with players from top club leagues.

Jamaica sprang a surprise Thursday by leaving captain Khadija (Bunny) Shaw on the bench. The Manchester City forward, who had 54 goals in 38 senior appearances for Jamaica, came into the semifinals tied for the tournament scoring lead at three goals with Canada’s Grosso.

Sixteen of Shaw’s goals came in the 2018 CONCACAF Women’s Championship, helping the Reggae Girlz become the first Caribbean nation to qualify for a Women’s World Cup.

Jayda Pelaia of Brampton, Ont., who played collegiate soccer for East Carolina and Arizona State, started at fullback for the Reggae Girlz but had to come off in the 10th minute after her leg appeared to buckle in an early challenge. Goalkeeper Jazmeen Jamieson of Toronto, who plays for the Simcoe County Rovers in League1 Ontario, was on the Jamaican bench.

With files from Glenn Hendry