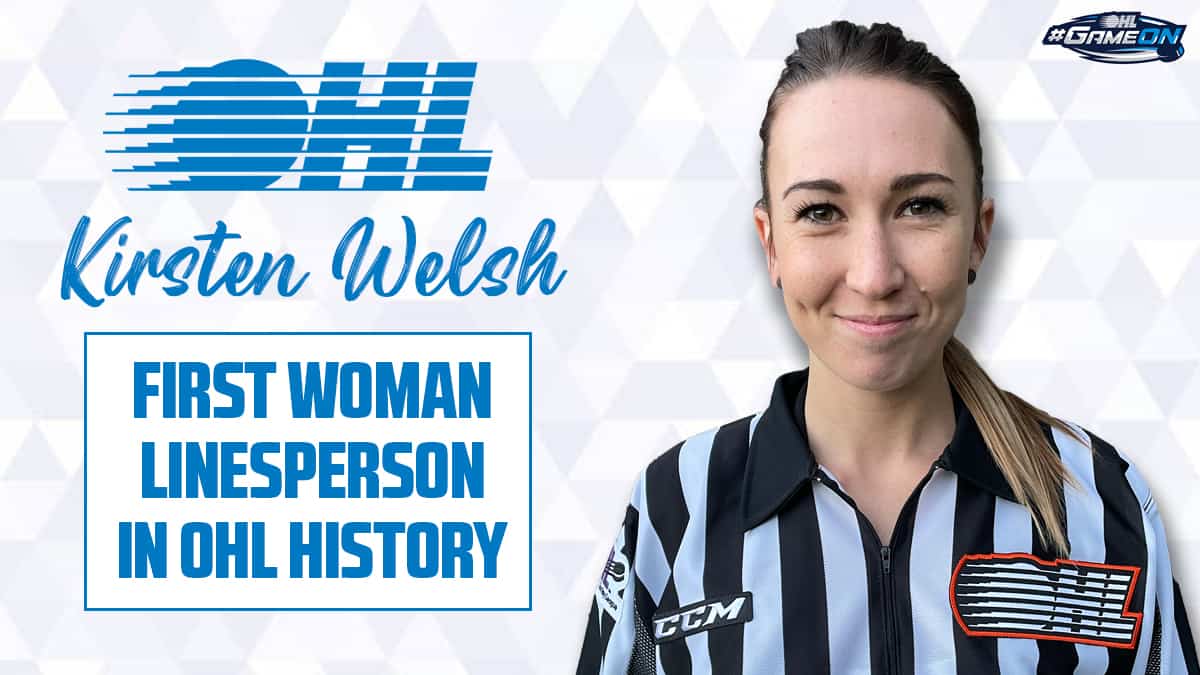 Thursday night’s OHL pre-season game in Mississauga will be one for the history books.

The exhibition contest between the host Steelheads and Guelph Storm will feature a female official for the first time in league history.

Kirsten Welsh, who originally hails from Blackstock, Ont. and is a graduate of the Whitby Wolves Women’s Hockey Program, will become the first woman linesperson to work an OHL game when she takes to the ice tonight.

A member of the OHL Officiating Team for the 2021-22 season after attending the NHL Officiating Exposure Combine this past August in Buffalo, NY., Welsh will also work Friday’s pre-season game between the host Oshawa Generals and Windsor Spitfires.

“This is an incredible opportunity and I can’t really put into words what it feels like to be working in the Ontario Hockey League,” said Welsh. “Just being one of the first women to do this, it really opens that door to women in hockey who want to have an alternate avenue that maybe isn’t playing in the Premier Hockey Federation or playing on a national team.

“Being an advocate and having this opportunity, I just feel so lucky,” she added. “It’s an incredible process to be a part of. I’m so lucky I can be a part of something that is going to affect generations of little girls.”

The 24-year-old currently resides in Freedom, Pennsylvania after graduating as captain of the Robert Morris University women’s NCAA hockey program.

She patrolled the blue line there from 2015-19, where her collegiate career included several awards and honours including being named the 2018 CHA Defender of the Year.

In September 2019, Welsh became one of four women to officiate at the NHL level for the first time, working in the Buffalo Sabres’ pre-season prospects tournament held at the LECOM Harborcenter.

“We first met Kirsten at the NHL Exposure Combine in 2019 and we were immediately impressed by her presence on the ice,” said OHL Director of Officiating Conrad Haché.

“She approaches and prepares for each game in a professional way, is a great skater and has a tremendous desire to continually improve.

“These traits will not only make her a great OHL official, but also a great ambassador for our League.”

“On behalf of the OHL and its member teams, I’d like to extend a warm welcome and congratulate Kirsten Welsh on the accomplishment of joining the OHL Officiating Team,” said Commissioner David Branch.

“Kirsten has demonstrated an ability to officiate the game at a high level and we’re excited to see her break barriers as she continues her development as a linesperson in the OHL.”