Driverless shuttle bus rolls into Whitby in a Canadian first 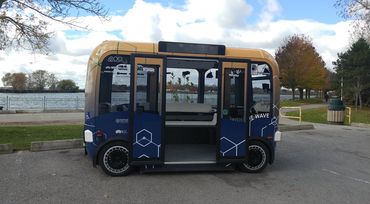 A largely smooth ride, with a few abrupt stops, awaits Whitby commuters when the WAVE autonomous shuttle opens for public use later this week.

The shuttle is a joint venture between nearly a dozen partners including Durham Region, Town of Whitby, Ontario Tech University, Durham College, Metrolinx and Nokia, and spearheaded by SmartCone and its subsidiary AutoGuardian.

The WAVE runs a six-kilometre route from the Whitby Go station, around Whitby Harbour, to Rotary Sunrise Park. While there is an attendant on board, the WAVE travels down the pre-programmed route fully autonomously. The attendant monitors the shuttle and applies a brake if necessary. It’s guided by radar and lidar sensors around the outside of the vehicle that warn the WAVE of any obstructions in the roadway.

Olli, as the shuttle is dubbed, reacts almost immediately to anything entering too close to the range of its sensors. It can pick up everything from a car approaching or passing too closely to leaves blowing across the roadway. This sensitivity means the shuttle cannot operate in heavily inclement weather since raindrops and snowflakes will trigger the brakes. It can, however, run in light conditions.

AutoGuardian CEO Tenille Houston describes Olli as being “more cautious” than your average driver. However, this occasionally leads to abrupts stops that hurtle passengers toward the front.

This is the system working as intended though and as the technology improves, the ride will grow smoother. A similar vehicle being tested in Toronto is already showing that advancement as a Phase Two model, the second of five planned phases.

While other WAVE shuttles have been tested around the world from Montreal to Germany, Whitby’s Olli is the first to be integrated into an existing transit system. It will represent DRT Route 300. A fact Durham Regional Chair John Henry said is “further cementing Durham Region as a leader in innovation, technology and industry.”

Whitby Mayor agreed. “We’re very proud to host this project… This is about building a future that is safe and sustainable.”

That Olli is electric is one of many ripple effects in innovation the project is causing. Another example is in insurance and legislation. Given the unique nature of the project, AutoGuardian had to work with insurance companies to design a specifically tailored policy. “It is a very complicated space,” said Houston. “Projects like this are really moving the needle forward in Canada.”

The project is also leading innovation in smart infrastructure. It employs 50 smart torches along the route to track traffic and how drivers and even pedestrians are reacting to the shuttle and signal that Olli is approaching.

Since this is a pilot project, Olli will only be operating until 2022 to test and refine the technology. Houston said a more permanent rollout is a little while away. “There’s still a lot of policies and procedures were been working with … There’s definitely some policies and procedure that need to be worked through before this is more commercialized, off the shelf.”

In the meantime, the WAVE shuttle projects will ferry Whitby residents around Whitby Harbour from 8:30-3:30 on weekdays, and eight to seven on weekends. Public ridership is set to begin in the coming days.

Update: This article initially said the WAVE Shuttle could not run in rain or snow. It has since been updated to reflect that Olli can run in light rain and snow conditions.