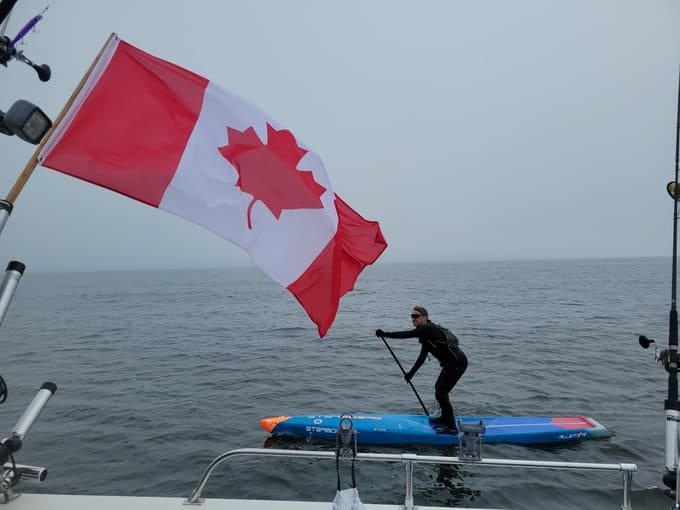 An unsuccessful attempt to cross Lake Ontario on a paddleboard in 2021 “wounded” Mike Shoreman but considering what the Whitby man has gone through since he was diagnosed with Ramsay-Hunt Syndrome four years ago, that pain was motivation to not only try it again, but to throw in another four Great Lakes crossings as well.

Go big or go home, right? And Shoreman is not ready to go home, though the time to do that is fast approaching.

So far Shoreman and his team of drivers, nutritionists, trainers, navigation experts etc. have taken down four of the lake crossings.

Only one remains: Ontario, the site of last year’s heartache and a most familiar body of water that he will cross – he has no doubts – this Friday in a marathon that is expected to take twenty hours.

In doing so Shoreman, who was a former paddleboard coach and competitor before the diagnosis, will become the first person with a disability to cross all five lakes on a paddleboard.

The goal of the crossings is to raise money and awareness for mental health, particularly as it applies to children. Shoreman’s team have so far raised more than $60,000 for Jack.org, a Canadian charity working to train and empower young leaders to revolutionize how mental health is viewed and treated.

Shoreman went through hell and back in the months after being diagnosed with the disease, a chronic condition that caused his face to collapse on the right side and resulted in hearing impairments, speech problems and a loss of balance, effectively ending his professional paddle boarding career, his business and his social life.

It is the same disease pop star Justin Bieber was recently diagnosed with, forcing him to cancel his North American tour. In Shoreman’s case, the disease wasn’t caught quickly enough and he woke up one morning unable to walk.

“I emotionally and mentally shut down. I stopped communicating and talking to my loved ones. When you lose your mobility, you lose your independence and I wasn’t coping with all these new disabilities dealt to me,” he said. “I went into a huge depression. And then in April 2019, six months later, I tried to take my life.”

I think it just hit me that Im about to become the first person with disabilities to cross all five Great Lakes for young Canadians across the country. 🇨🇦 pic.twitter.com/Lc4BRZw4IO

The next day he entered into a treatment facility “and the work began.”

After months of physiotherapy and retraining his brain to walk normally again, doctors said it wasn’t possible for him to get on the board again. And though he still struggles with exhaustion and dizziness, he is back on a board, reclaiming his identity and building his confidence back up.

Vicki Keith, the legendary marathon swimmer who swam all five Great Lakes in 1988, was one of those “dream big” people who inspired Shoreman in his quest but she’s not alone on his inspiration list.

“I am inspired by ideas and challenges and people. Rick Hansen is a big hero of mine, so is Jeff Adams. Amazing Canadians with disabilities who set out to do incredible feats to raise funds for kids,” he said. “A lot of things inspired me. I think the unsuccessful attempt at crossing Lake Ontario last year wounded me but also made me want it more. I worked harder than I ever have to try to make this happen.”

One of the motivations that drive Shoreman has been kids and the belief that they shouldn’t have to feel the way he did, which was “alone and scared.”

Coming up just after the 5:30 news, John Howell speaks with Mike Shoreman (@MikeShoreman), who is a paddleboarder attempting to cross all five Great Lakes for a great cause.

“Mental health is the leading cause of health related death for young Canadians and a big part of that is that is because we still aren’t where we need to be in terms of stigma and shame,” he said. “I think Canadians look at their own kids and think ‘my kids are okay, so everyone’s kids are okay.’ Unfortunately, that’s not the case and mental health organizations are struggling to keep up with increases in access to services they provide.”

“When data shows a jump from one-third of teens accessing mental health programs in 2019 to two-thirds of Canadian teens accessing those same programs and services in 2022 it shows we are in a lot of trouble. It’s a slippery slope from ‘not being okay’ to ‘not being here.’ It’s extremely important that young Canadians know they aren’t alone.”

Shoreman also took steps to get kids engaged in the crossings with a 12-page ‘Canada’s Great Lakes Crossings’ activity and colouring book – featuring mental health tips and tricks – which will be sent to all who make a pledge (in PDF format to be downloaded and printed) so kids and young people can go on their own Great Lakes Canadian adventure this year.

Colouring and doing simple but engaging games was a big part of Shoreman’s physical and mental health recovery. He still colours, does crosswords and puzzles to this day as a relaxation technique.

“It’s unfortunate mental health isn’t more tangible in a way like physical illness are, showing the devastation, because if it were, I don’t think we would lose as many kids as we do. Putting mental health programs in schools makes it easier. It’s convenient, it’s a safe place and it’s where their peers are,” he said.

Training for the lake crossings has been tough, not only on Shoreman but also on his team of some 40 people who make sure he is ready for each adventure. “They’re all exhausted!”

I want to say thank you to Mike Lowe from WGN News in Chicago. Mike drove an hour and a half from Chicago to interview me for 6 am as I launched from Michigan. He was very nice and it meant a lot to me to have someone there in a city where I didn't know anyone. pic.twitter.com/3FIt1ID6pw

Shoreman’s marathon began on Lake Erie May 27 when he crossed the lake from Sturgeon Point, New York to Crystal Beach, Ontario. Next up was Lake Huron in June – Harbour Beach Michigan to Goderich, Ontario – the longest paddle of the journey at 28 hours.

“I will remember that one mostly because of the medical emergency in the middle of the night,” he said. “That was also my first time crossing in the dark. It was new to all of us, and we all breathed a sigh of relief when the sun came up.”

Mighty Superior came next – Orienta, Wisconsin to Two Harbours, Minnesota – which was surprisingly the easiest crossing so far. “But she did act up and make me fight for it the last hour. We were lucky it was only an hour of that because you couldn’t manage more than an hour or two of what it was turning into.”

Lake Michigan, at 27 hours from Union Pier, Michigan to Chicago and with mostly rough conditions, was the hardest on his body, Shoreman said. “I am still recovering. Marathons on water are exhausting. It becomes a mental game eventually because at some point the body is done.”

That leaves just one lake to go and Shoreman is determined to shake off last year’s setback and finish the journey.

“I think I was most nervous to tell my mom that I was doing it again,” he said. “I thought she would be worried because of my physical challenges and going through the night in the dark but she is my biggest cheerleader.”

Shoreman is preparing to paddle away from Youngstown, New York (across the Niagara River from Niagara-on-the-Lake) Friday with Toronto and the Harbourfront Centre in his sights.

“I am looking forward to arriving August 20th and I am hopeful Ontario will be my favourite,” he said. “I am trying to be optimistic. I didn’t make it last year but this year I have four behind me, so I think I am better prepared.”

Inspiring to see @MikeShoreman progress on his pursuit to become the first person with a physical disability to cross the five great lakes to raise funds for @Jackdotorg – supporting youth mental health.

Toronto is cheering you on, Mike! https://t.co/KI2OoOVkN4

Shoreman, a speaker, author, the winner of Canada’s largest inspirational speaking competition – Speaker Slam – and the winner of last year’s Stand Up Paddleboarding Man of The Year Award (the first Canadian and first person with a disability to do so), said he is trying not to get too “caught up in outcomes” but it would be “really exciting” to complete all five crossings.

“My dad keeps reminding me that it’s okay if it’s not a sweep but I set out to do this to raise funds for kids so I feel a weight and a responsibility.”

I want to say a big thank you to Great Lakes Brewery for sponsoring a VIP catered event for corporate, dignitaries, the media, my teams and my people for about 400 people. I also want to thank @Westin Harbourfront Castle who will be looking after my teams that night. 🏄‍♂️🇨🇦 pic.twitter.com/zPPvXiBJOD