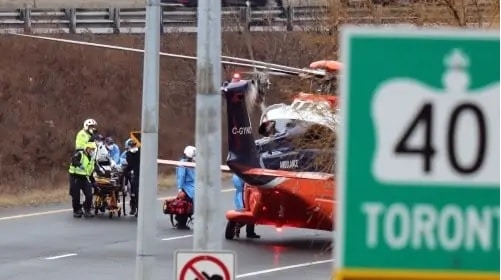 The provincial police watchdog has cleared the officers who used a spike belt and ‘rolling block’ during a stolen vehicle pursuit four months ago, where the suspect died in hospital.

Ontario Special Investigations Unit (SIU) Director Joseph Martino says he has found “no reasonable grounds” to believe that officers with the Whitby detachment of Ontario Provincial Police (OPP) and Durham Regional Police Service (DRPS) committed a criminal offence in connection with the death of a 45-year-old man. On Jan. 9, a vehicle that the suspect allegedly carjacked from a drive-thru in Port Hope crashed near Newcastle, in the area of Highway 115/35. The truck hit the spike belt, and went into the ditch. Whitby OPP officers had taken the lead in the pursuit of the carjacked vehicle, and DRPS officers had set up the spike belt.

The 45-year-old man got out of the vehicle after the crash, leaving a handgun inside of it. Per the findings by the SIU, he fled on foot with a machete, which he used to cause “self-inflicted knife wounds” that led to his death in the hospital.

“There were no reasonable grounds to believe that any of the officers involved in the events that culminated in the man’s death failed to comport themselves within the limits of the criminal law, leaving no basis for proceeding with criminal charges in this case,” Martino stated. “The file has been closed.”

Five police officers — referred to as witness officials in SIU terminology — were interviewed by the SIU during their investigation. Two other officers’ notes were received and reviewed.

The full report, which contains graphic content that can shock, offend and upset, is available at siu.on.ca.