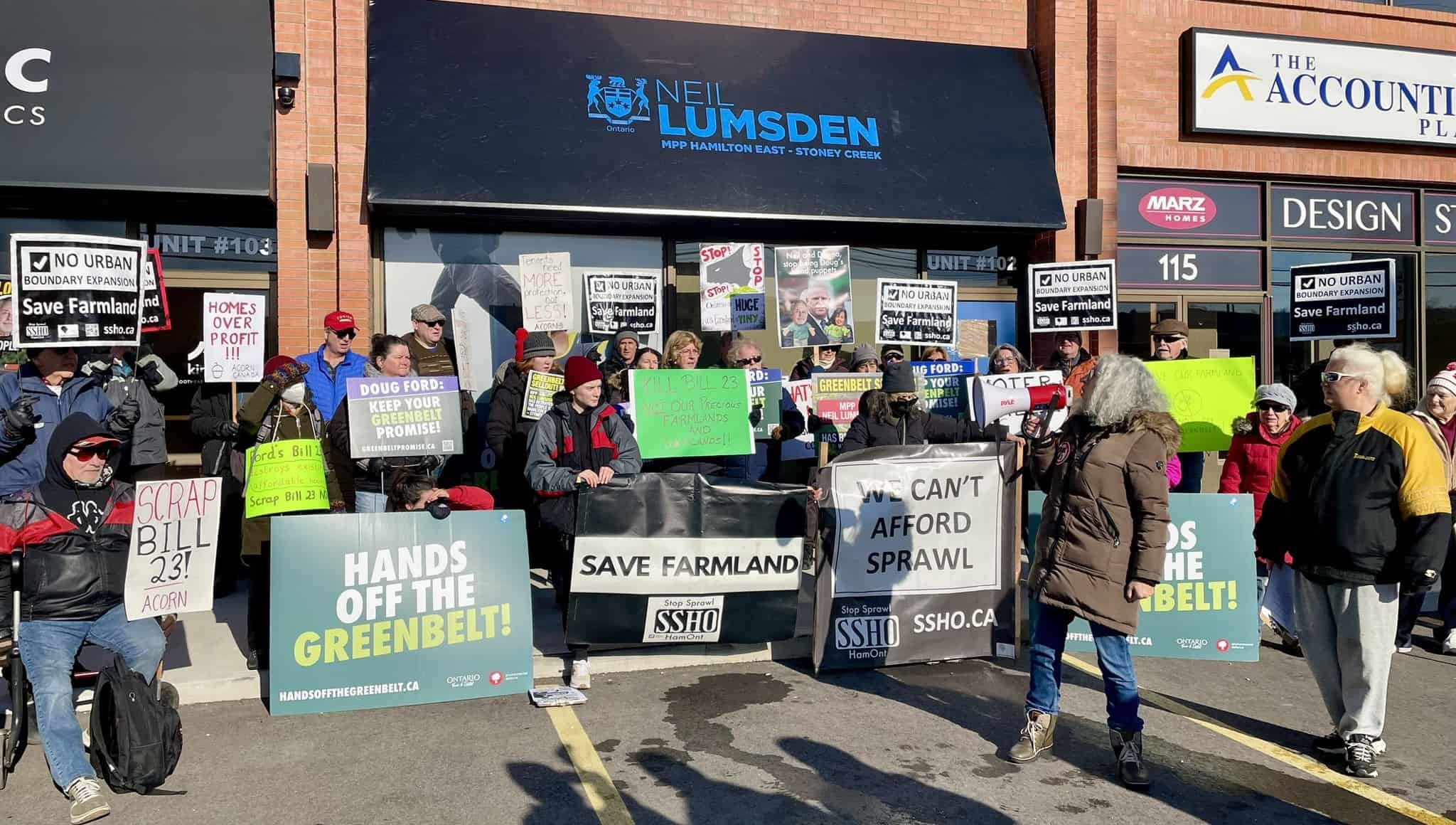 Climate and renter groups in Hamilton say that Ontario Tourism, Culture and Sport Minister Neil Lumsden is shying away from contact.

The groups said they had “an initial reply from Lumsden’s office to arrange a meeting” after a similiar demonstration over five weeks ago, on Nov. 3. They say they “have not heard back for a meeting date.”

Neither Lumsden nor fellow Hamilton-area MPP Donna Skelly (Flamborough—Glanbrook) have responded to messages seeking a statement in regard to their willingness to meet with constituents. Both voted in favour of the bills, along with the rest of Premier Doug Ford’s caucus.

On Tuesdsay, a letter under the banner of ACORN Hamilton and StopSprawl HamOnt was affixed to the door of Lumsden’s office.

“ACORN and Stop Sprawl are requesting a meeting as soon as possible to stop Bill 23,” its closing paragraph reads. “We look forward to hearing from you.”

The aim of Bill 23 is to build 1.5 new million homes in Ontario over a decade, but it amends 10 existing provincial acts. Indigenous nations and representatives have said they were not consulted before the bill was introduced. Municipal politicians, agricultural and conservation groups, social service organizations and healthcare advocates have condemned the bill.

City council in Hamilton has asked the province to repeal or reconsider several sections of Bill 23. They recently invited both Lumsden and Skelly to meet with them in early 2023.

Ward 9 City Coun. Brad Clark said of Bill 23, “The developers are getting a Christmas present while cities and taxpayers are seeing The Grinch.”

In the rental realm, critics have charged the bill will allow the province to stop cities from having ‘rental replacement’ policies that guarantee tenants of demolished buildings can return to live in the new buildings that take their place. Tenant groups refer to the practice as ‘demoviction.’

Ford and Municipal Affairs and Housing Minister Steve Clark, between May 2018 and September 2022, said at least 19 times that a PC Party government would not touch the Greenbelt. It was established in 2005, by an Ontario Liberal government, to protect 1.8 million acres of farmland, forests, river valleys and wetlands in the servce of climate adaptation and food security. But the recent provincial legislation removes 7,400 acres of forests, farms and wetlands from the Greenbelt.

A decision in Hamilton to create a firm urban boundary and not allow residential development on farmland was also nixed by the province last month. All six city councillors who voted in November 2021 to freeze the boundary were re-elected in the Oct. 24 municipal election. None of the three who favoured development remain on council following two retirements (former councillors Lloyd Ferguson and Terry Whitehead) and electoral defeat (Maria Pearson).

Bill 39 grants mayors of Toronto and Ottawa the power to pass certain bylaws without a majority vote from councillors. They would only need one-third support.