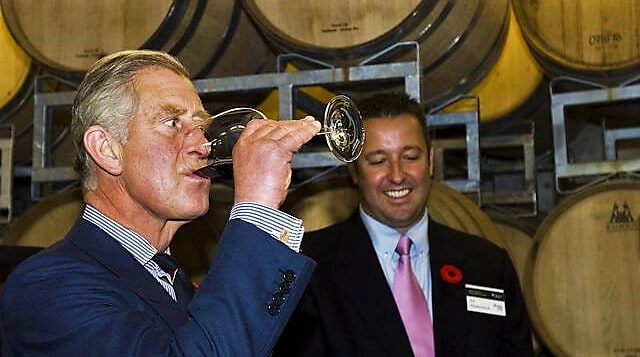 Prince Charles tips back a glass in the wine cellar of the Niagara College Teaching Winery during a tour stop in November 2009.

The Niagara College Teaching Winery has seen many of official dignitaries pop in over the years. From high-ranking politicians to celebrities, many have crossed into the institution.

But only once have they seen royalty. During a 11-day tour of Canada with his wife Camilla, the Duchess of Cornwall, Prince Charles stopped in on a snowy, blustery day in November 2009.

Naturally, the staff and students, all of whom are long-gone now, dropped everything for the Royal Visit.

Camilla wouldn’t be joining him as she passed on the Niagara-on-the-Lake leg after the couple visited Hamilton’s Dundurn Castle, built by her great-great-grandfather, earlier the same day.

According to a Buffalo News story written afterwards, the Prince of Wales “emerged from the 20-vehicle motorcade that brought him from Hamilton, wearing a gray double-breasted suit but no topcoat.” He, of course, drove in on the Queen Elizabeth Way (QEW) named after his mother.

The News said that happily opened an umbrella and “began working the crowd of drenched well-wishers who had begun lining up behind a white picket fence two hours earlier for the chance to demonstrate their fealty to the crown.”

The Prince was ushered into the visitors center, where college officials briefed him about the teaching winery, which, at that time, was just five years old.

In the downstairs wine cellar, the royal guest tasted several varieties made from grapes grown in the school’s 40-acre vineyard at the base of the Niagara escarpment.

According to the paper, Prince Charles lingered on with officials long after the one-hour limit set for the side-trip.

Niagara College, just 10 years old at the time, didn’t actually request the royal visit. Organizers for the tour put it on the Prince’s agenda. knowing his interest in environment and rural affairs.