What's Happening with this Existing Pipeline in Mississauga?

A big construction project is coming to Mississauga.

If you're a Mississauga resident living in the vicinity of the Credit River and Highway 403, then you should know that a major construction project is set to kick off there when a portion of an existing oil pipeline is replaced.

The Imperial Oil's Sarnia Products Pipeline (SPPL), which was constructed during the 1950s, carries refined gasoline, diesel and jet fuel to Pearson International Airport, running from the Finch Terminal in North York, across the Western GTA region to Waterdown Station in Hamilton. 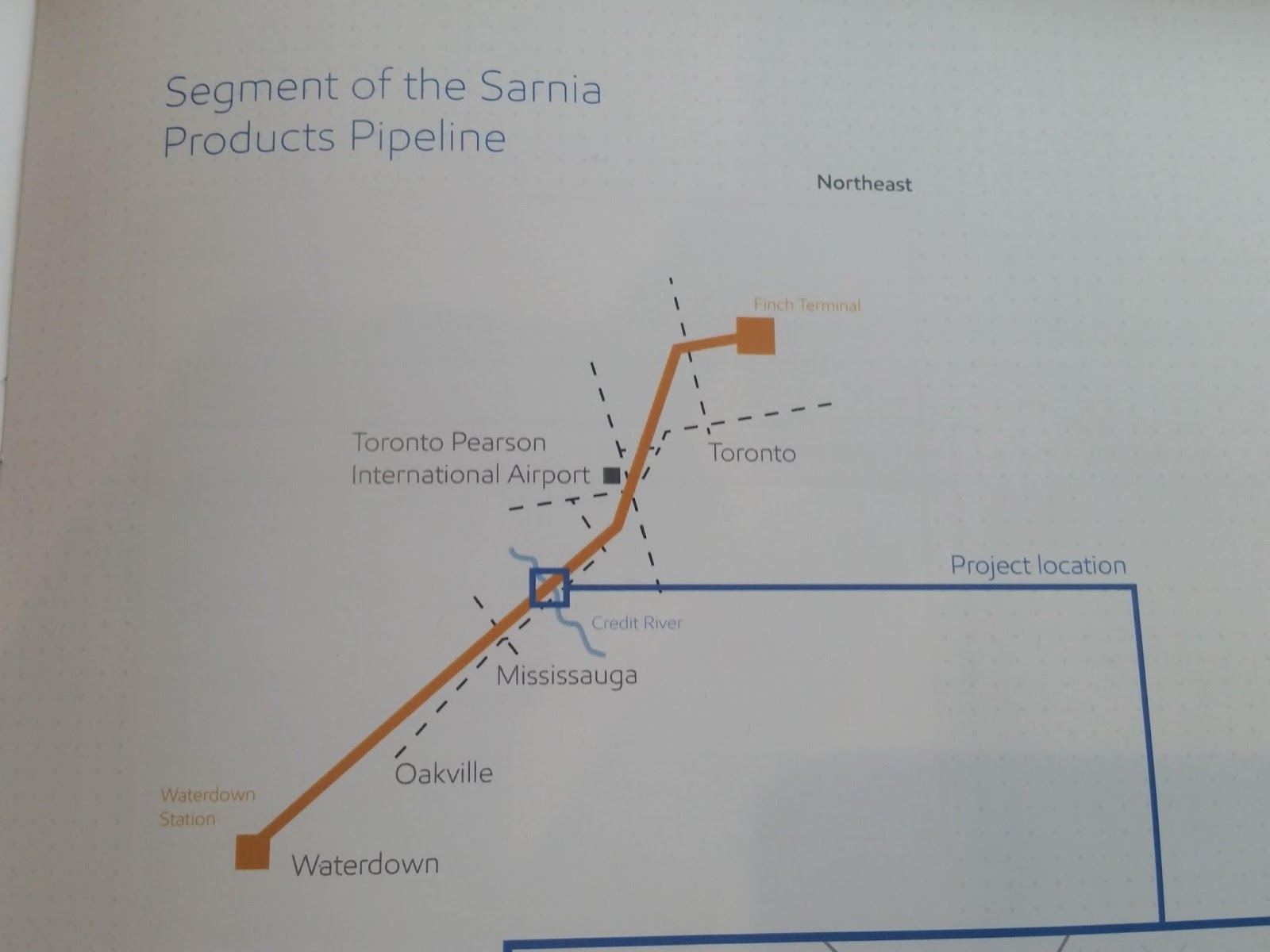 An open house information session was held on April 18 for residents at the Living Arts Centre.

The project is set to begin in the fall of 2018 and finish in the spring of 2019, the work will be done on land owned by the city, Infrastructure Ontario and Hydro One. Below is a map of the approximate location and where the section of pipe will be. 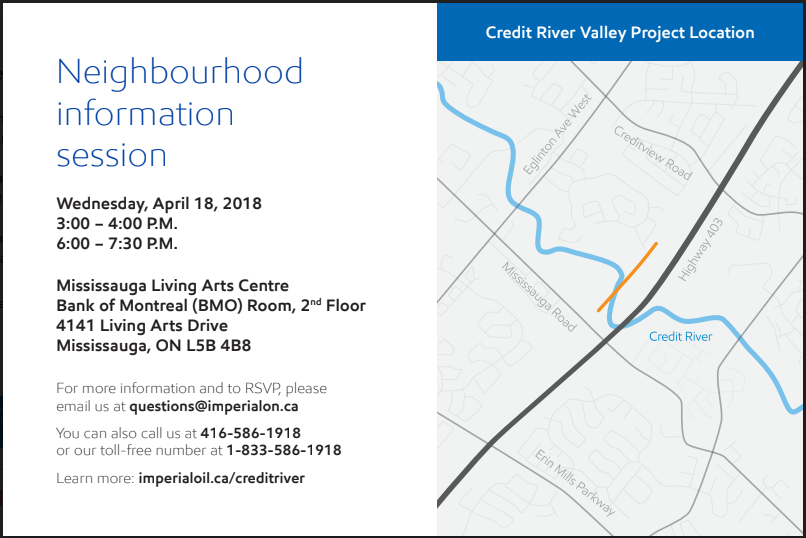 There is going to be drilling of two access points, one at Mississauga Road and the other will come off the Wellsborough Place cul-de-sac at the site of Culham Trail. 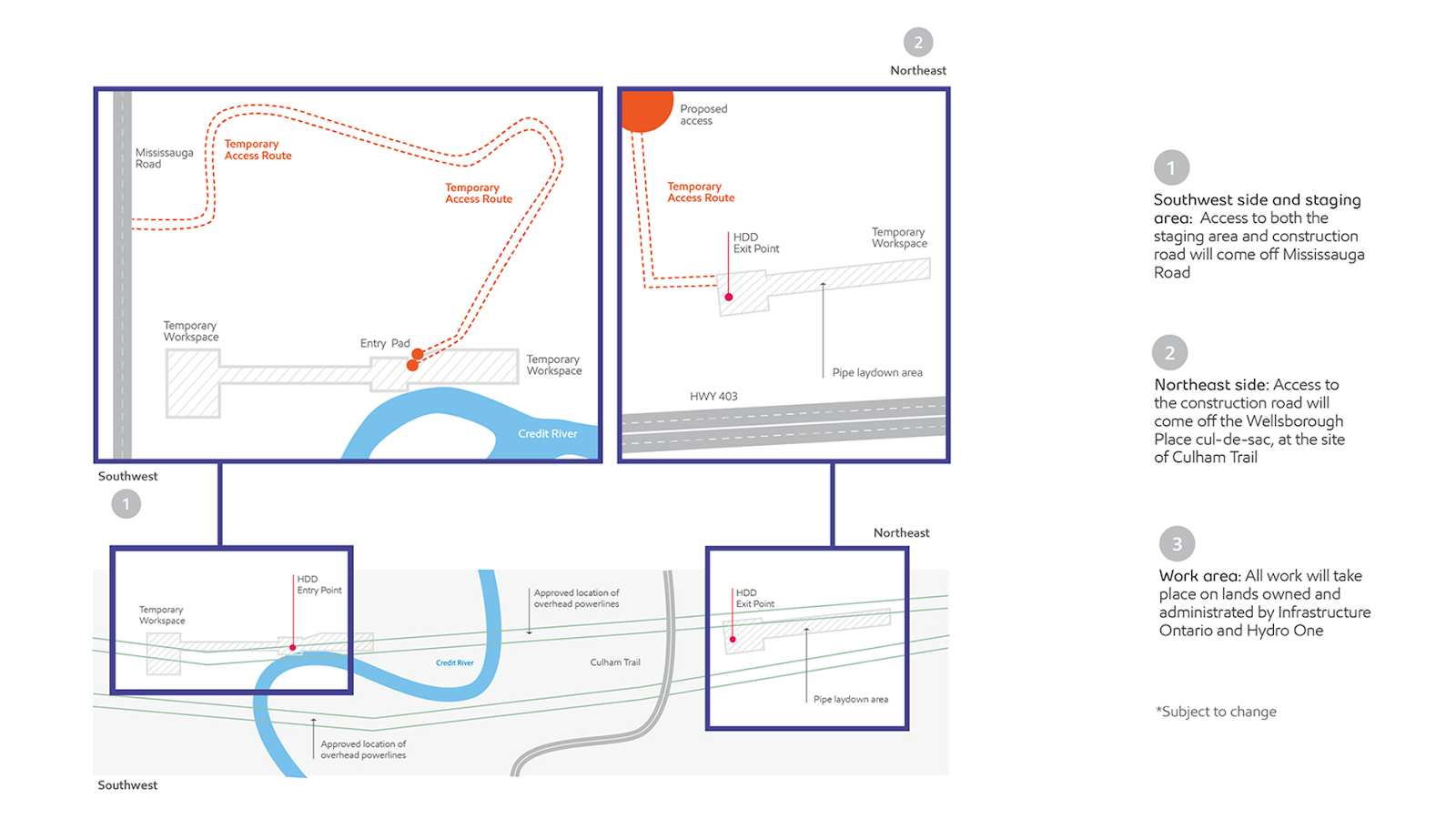 Imperial is utilizing a technique known as Horizontal Directional Drilling (HDD) to install the pipeline segment. According to them, this is the least intrusive and most advanced technique to do this kind of work, in light of the section of the pipe lying underneath the Credit River Valley. 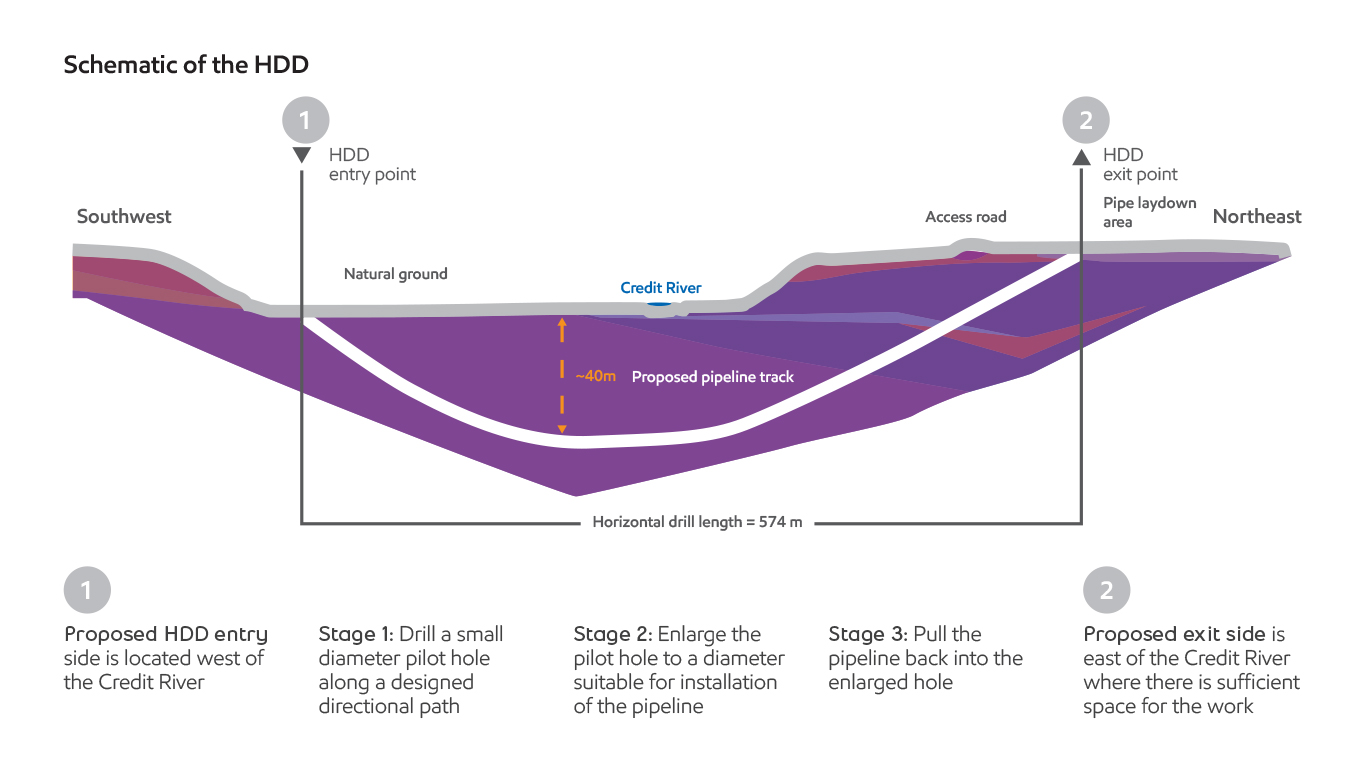 From what the staff at Imperial Oil said, the drilling could take up to two months, based on past experience with similar projects of this size and scope. They will take around five days to connect the new pipe with the existing pipeline.

As for meeting proper environmental guidelines, Imperial is set to commence an archaeological assessment with Indigenous monitoring this spring, followed by environmental and regulatory review in the fall of 2018, by which time they expect the permit review to be completed and permits received.

Since this is not actually a new building but rather maintenance work being done on existing infrastructure, a provincial Environmental Assessment was not required.

There is also the matter of how water will be protected from potential contamination. Imperial Oil is using a safe decommissioning process of the current pipeline. Trained workers will clean and inject the segment with cement or grout to ensure the ground surface will not sink or settle.

If you're wondering why you haven't received any information that this project was coming, Imperial said that they sent out some 500 newsletters to homeowners in the immediate area, so not everyone in Mississauga may be aware this work is taking place.

Since work is not taking place on any roads, they are not anticipating any traffic disruption. Also, this is preventative maintenance on key infrastructure that transports fuel to the airport; it's better to get this done now than wait for it a decade later.

But if you are concerned about the project and have more questions, more information on the project can be found here.

Popular Toronto pizzeria Blondies Pizza opens a cute new location in Mississauga
Mississauga is the city where foodies can explore cuisines from all around the world and every new restaurant that pops up offers an experience to remember.
END_OF_DOCUMENT_TOKEN_TO_BE_REPLACED