What’s Happening with the Massive 410 Re-Design? 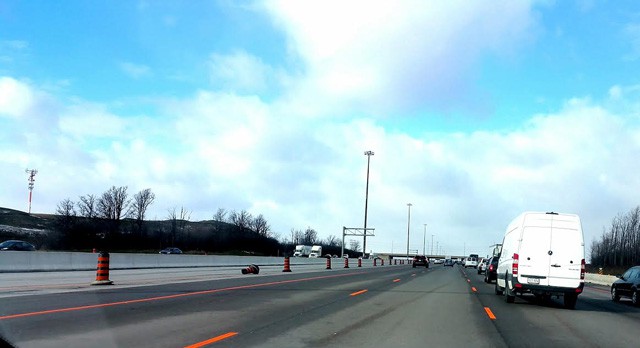 If you’re a Brampton dweller who regularly uses the 410, you’ve probably wondered when the major facelift the highway is undergoing will be complete–especially since, when driving down the highway


If you’re a Brampton dweller who regularly uses the 410, you’ve probably wondered when the major facelift the highway is undergoing will be complete–especially since, when driving down the highway, it’s easy to see the progress that’s been made since the massive project commenced in 2014.

At this juncture, parts of the planned HOV lanes look close to complete, but they’re not yet open for use and won’t be for awhile.

According to the Ministry of Transportation (MTO), the lanes won’t be open until the entire project is finished.

“All lanes will open at contract completion, which is anticipated to be at the end of 2018,” said Astrid Poei, communications coordinator with MTO in an email to inbrampton.com.

The completion date is in line with what MTO projected when the project first kicked off almost three years ago. The 410 construction is a massive–but necessary–undertaking that will take some time to conclude.

As you probably know, the highway is being reconstructed from Eglinton Ave on the 403 to north of Queen Street. Major project highlights include the addition of one HOV lane and one regular lane on both the north and southbound sides, commuter parking lots at the Courtney Park Drive and Clark Blvd. interchanges, widening/rehabilitating several structures between Eglinton and Queen, installing traffic cameras and an Advanced Traffic Management System and the placement of a median tall wall barrier.

So, there you have it, construction will continue into late 2018. While that might seem frustrating, you’ll most certainly enjoy the expanded and refreshed highway when it’s complete.