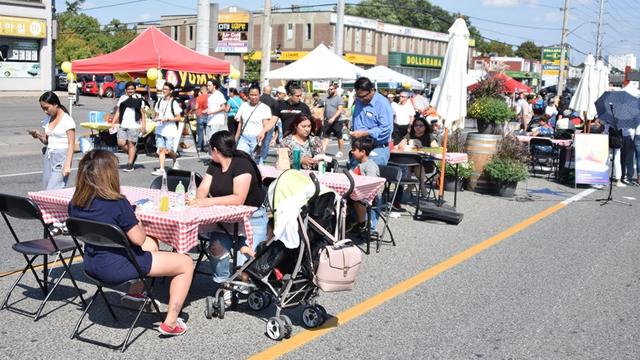 Back over the summer insauga.com reported on some major changes could be happening to one of Mississauga’s busiest, but often neglected neighbourhoods: Cooksville.

Once a neighbourhood that had its own fire hall, town hall and vibrancy, Cooksville has fallen on hard times even though it continues to be a major transit hub for Mississauga with an increasing population. Lately, it’s been mostly a place where people pass through on their way to Port Credit.

Back around May, a town hall was held by local city councillor Dipika Damerla (Ward 7) to begin the process of starting a ‘Cooksville BIA (Business Improvement Area)’. During the town hall, a steering committee was formed to formalize the Cooksville BIA’s boundaries down the road.

“We are pleased and excited to announce the formation of a steering committee for the creation of a BIA for the Cooksville area of Mississauga. Our intention is to create a unique and beautiful destination for everyone to explore and enjoy within Cooksville,” said Steven Smith, local business owner and chairman of the Cooksville BIA Steering Committee.

This past week, another meeting was held for the steering committee to provide updates on how a BIA would be formed and representatives from local businesses were in attendance.

A presentation was given by Smith and other city staff on the details.

The purpose of a Business Improvement Area (BIA) is to oversee the beautification and maintenance of municipally-owned land, buildings and structures in the area beyond that provided by the municipality.

A BIA comes into existence when the municipality (in the case the City of Mississauga) enacts a bylaw and managed by a volunteer board, like the ones they have in Clarkson, Port Credit and Streetsville. The BIA consists of property owners and tenants within a defined geographic boundary and paid for through a self-funded levy.

The levy would go to fund things like beautification of the neighbourhood, promoting safety and increasing capacity and coordination amongst businesses in Cooksville.

“With a BIA you can have a say in how the neighbourhood is developed and this is especially important for Cooksville as the LRT starts getting built, or spruce up the streets so it could look like this,” Damerla said.

Based on the presentation, the proposed geographic boundaries for Cooksville’s BIA are:

Some concerns were raised as to why the eastern boundary extended all the way across the bridge along Dundas to Cawthra. City officials said there was a Rona franchisee located at the end that could be included under the BIA, and cited possible future public transit.

Here are the statistics for daytime population numbers in various areas with BIAs operating:

As to how much a Cooksville BIA would cost to operate, here are a preliminary budget:

The $350,000 was prorated amongst 800 businesses based on their size, according to the city. To break it down even further, if your business pays a property tax bill of around $6,000, the BIA contribution would be roughly $20 per month, according to Damerla.

The next step would be for the steering committee to make a formal request to council to establish a BIA. City council would then need to endorse the request and provide 60 days notice to all business owners within the area that it is preparing a bylaw to create the BIA. Landowners are required to pass on notice to their tenants.

The bylaw can be stopped if one-third of businesses that comprise at least one-third of the assessment base objects to it. Therefore, if there is no response from businesses after the 60-day deadline, the assumption is that there is no objection and the city will then pass the bylaw to form the BIA.

We recently had the first-ever Taste of Cooksville food festival which saw a section of Dundas closed off for an afternoon for the festivities with little complaint.

Would businesses in the area be inclined to pool their resources together to continue funding festivals like this and other positive benefits to Cooksville in the future?