What Should Replace the Square One Sport Chek? 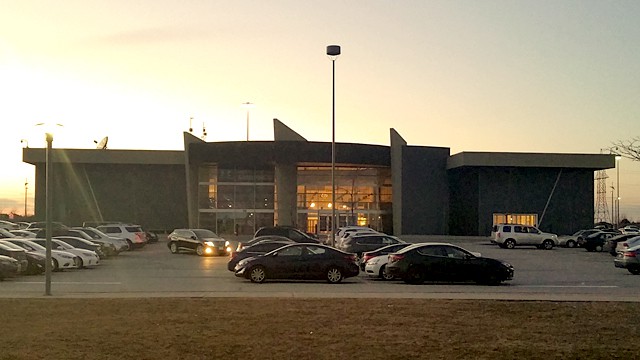 The standalone Sport Chek off of Rathburn near Square One is closed (Sport Chek fans can now purchase their favourite active wear inside the mall) and the sizeable location is seemingly up for grabs.

If there’s one thing we’ve learned here at insauga, it’s that nothing gets people more hot and bothered than newly unoccupied retail space. A suddenly empty storefront offers endless (well, not really, but you know what I mean) possibilities. Who will take over the spot? Will it be someone awesome and cool? Will it be Wal-Mart (unlikely)? We rarely celebrate new Wal-Marts.

Since there are rumors but no confirmations, we can all dream about what company will choose to invest in the newly open space in one of Mississauga’s busiest and most bustling neighbourhoods. Here’s a list of five places we (and you) might like to see in the old Sport Chek store.

Since Playdium is nearby, this is an unlikely occupant. That said, the sports bar and arcade chain caters more to adults and the possibility of a Mississauga location has intrigued some residents who have it on their “what-if?” wish list. Dave and Buster’s satisfies a lot of wants, as it boasts large TVs on which to watch sports, arcade games (retro is big right now) and alcohol. While it doesn’t seem like a likely contender, some video game and sports enthusiasts can dream.

There’s absolutely no indication that the popular independent record store that occupies a generous piece of real-estate on Spadina in TO has any plans to expand westward, but if the vintage-minded music aficionados behind the giant record store were to consider setting up a second shop here, we doubt too many people would complain. For those who don’t know, Sonic Boom is an Indigo-sized music store offering an absolutely staggering selection of vinyl, CDs and DVDs. It’s the perfect destination for shoppers who long to return to a time when music was more substantial and collectible than it is now. A time where you could hold a record in your hands and interact with the medium in a more intimate, physical way. Mississauga seems to have responded well to rerto-focused Urban Outfitters, so a Sonic Boom might tickle some hipsters and old-school audiophiles alike.

3) Our Own St. Lawrence Market

One thing readers have always expressed interest in is a permanent boutique food outlet in the vein of Toronto’s popular St. Lawrence Market. Mississauga has always responded well to farmers markets, so a spacious and airy shop that proffers homegrown produce, artisanal cheese, fine meats and delectable coffee all year round would satisfy people who treat grocery shopping as an experience that benefits local producers and fosters a sense of community. Since City Centre is a busy residential and commercial space, the market would no doubt appeal to local residents. It would also offer some unique, mid-level priced goods that might not be on offer at other nearby grocers.

Our readers have often wished aloud for a small-scale Ikea in the area and the Sport Chek location could conceivably house the popular and affordable Swedish furniture brand. While the unoccupied space is nowhere near as generously sized as the Ikea locations in Burlington and Etobicoke, it could offer a more modest showroom and warehouse area. With more students renting units in City Centre condos and more condos and townhouses being built constantly, a lot of residents are in the market for stylish furniture at a comforting price point. People also want easy access to glorious meatballs.

There have been persistent rumors that this brand is eyeing the space, but they’ve been tight-lipped about their intentions for Mississauga thus far. The massive outdoor life retailer is beloved by campers, fishers, hunters, cottagers and more. While I’ve personally never needed a fly-fishing kit or gun ammo (or a gun, for that matter), some Mississauga residents love to spend their weekends hunting for their next meal. There are also people who straight up love camping and prefer the specialized shop over, say, Canadian Tire. For all those outdoorsmen and women, a nearby Bass Pro is a dream come true. And, if the rumors are true, it could happen.