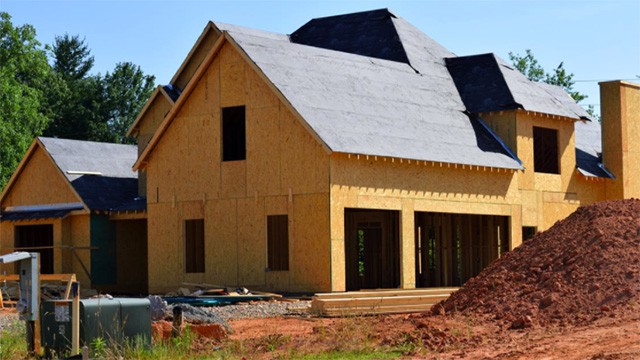 For January, that is.

“This reflects higher starts of multi-unit dwellings in urban centres in recent months, which has offset lower starts of single-detached homes.” 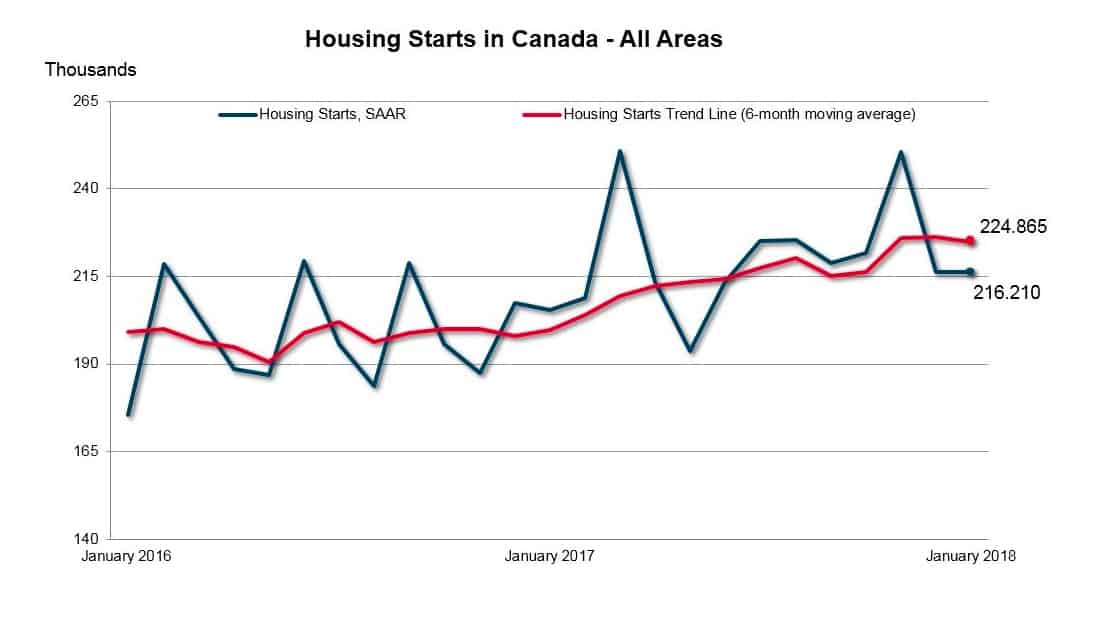 Guelph: January 2018 saw the highest number of apartment starts for any January since 1991. Since 2012, the proportion of single-detached and row starts lessened on a year-over-year basis as more apartments were built. Strong starts for apartment units in recent years can be partly attributed to rising costs of homeownership, rising immigration of young professionals to the area, and strong employment.

Toronto: For the second month in a row, housing starts in the Toronto CMA trended slightly lower. An increase in apartment starts partially offset the decline in single-detached housing starts. Increased supply in the resale market has resulted in less demand for new single-detached homes. Meanwhile new condominiums remain in high demand as home buyers flock to relatively lower priced homes, and investors seek to capitalize on low vacancy rates and increasing rents.

Barrie: Total starts trended higher in January, driven primarily by an influx of row unit starts in both the Town of Innisfil and the City of Barrie. Land scarcity in popular areas and affordability concerns have encouraged row unit construction, which saw the highest starts in 2017 since 1999. Strong labour market conditions and population growth remain supportive of the demand for new housing units going into 2018.

Kingston: The trend in Kingston CMA total housing starts has declined slightly for four consecutive months, after having been pulled up by high numbers of rental apartment starts in June 2017. This pullback is likely temporary, since high demand in the resale market and robust demand for rental accommodations point to a need for new supply.

Gatineau: In January, the number of new housing units that got under way was fairly high relative to the last few years, thanks to the construction of many units intended for the condominium market. The stronger housing demand and tighter resale market are therefore continuing to support residential construction in the area.

Vancouver: Starts for all home types in the Vancouver CMA trended up in January, reaching a pace nearly double that of the same month last year. There were 2,599 housing starts across the region in January of 2018, as opposed to 1,334 in January of 2017. The North Shore was a particular hotspot for activity this month as a number of condominium and rental multi-family units got underway.

Kelowna: Housing starts in the Kelowna CMA saw an increase in January 2018, totaling 87 units, compared with 51 units in the same month last year. The increase was supported by new rental units getting underway, continuing with the trend seen throughout 2017. New housing construction, particularly for multi-unit dwellings, continues to be supported by strong population growth and a robust labour market.

Edmonton: Housing starts in the Edmonton CMA have been trending lower since peaking in July of last year. On a month-over-month seasonally-adjusted basis, single-family starts were up 2% in January compared to December while multi-family starts were up 38%. Much of the increase in multi-family construction was due to an increase in the apartment segment where inventory levels remain elevated.

Lethbridge: Total housing starts in Lethbridge increased in the first month of 2018 compared to January 2017 with gains in both the single-detached and multiples segments. However, despite the year-over-year increase, both the trend and the SAAR recorded declines in January compared to the previous month. Declining employment in the region through 2017 has reduced demand for housing and has impacted the pace of new home construction.

CMHC uses the trend measure as a complement to the monthly SAAR of housing starts to account for considerable swings in monthly estimates and obtain a more complete picture of Canada’s housing market. In some situations analyzing only SAAR data can be misleading, as they are largely driven by the multi-unit segment of the market which can vary significantly from one month to the next.

Rural starts were estimated at a seasonally adjusted annual rate of 17,810 units. 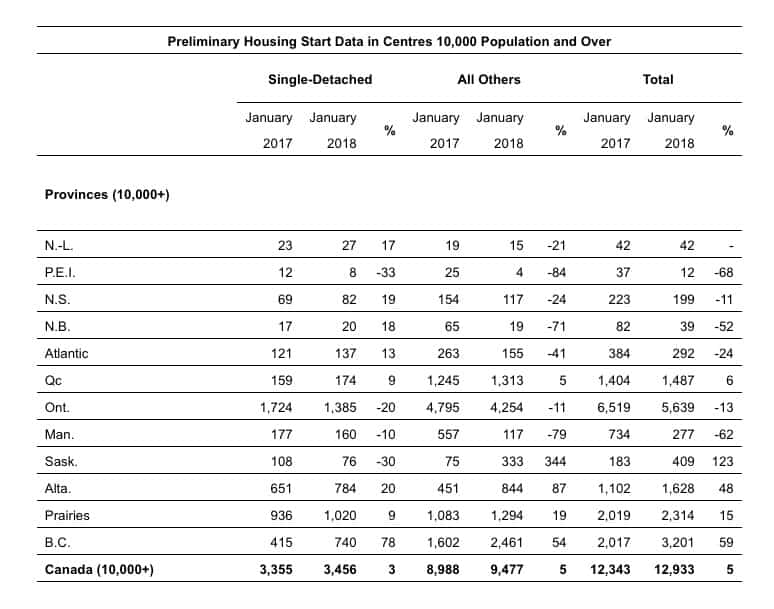 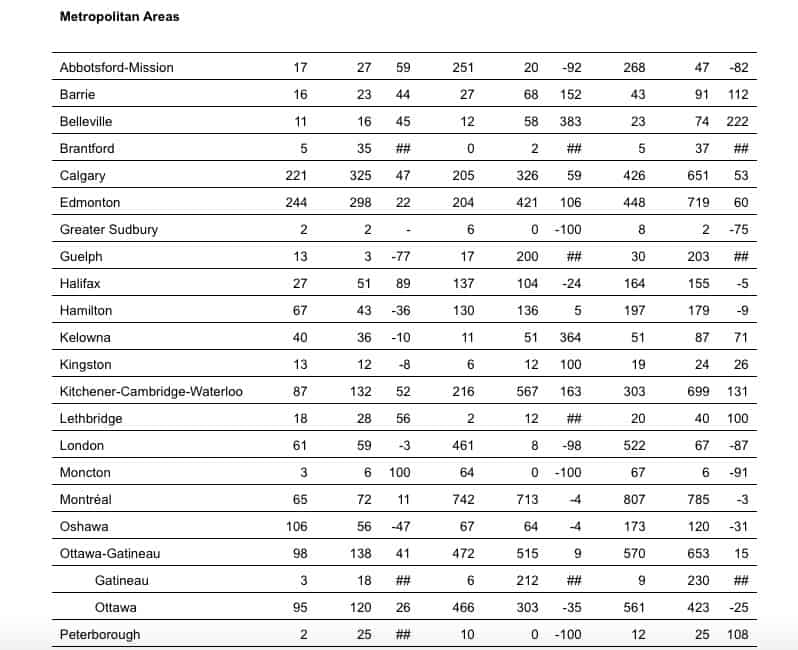 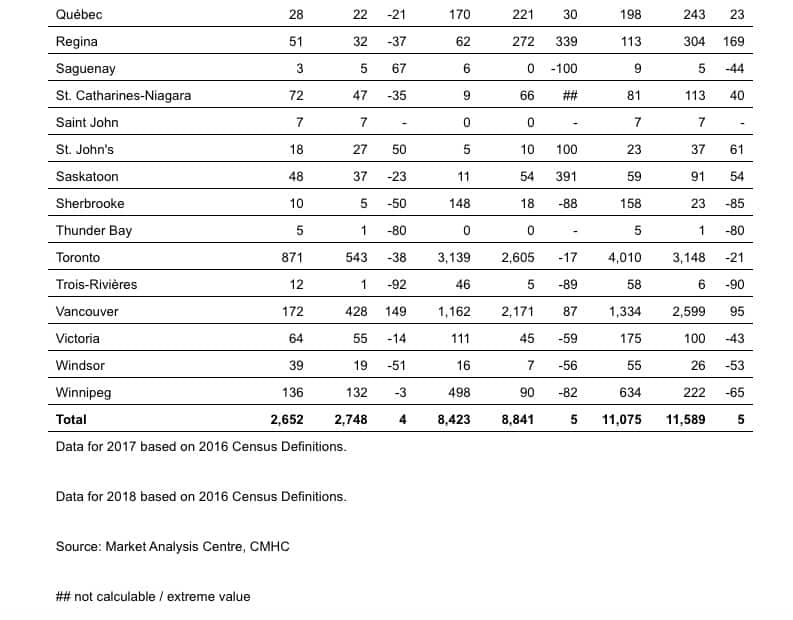