Welland Canal gets $22.7 million in funding for needed rehabilitation 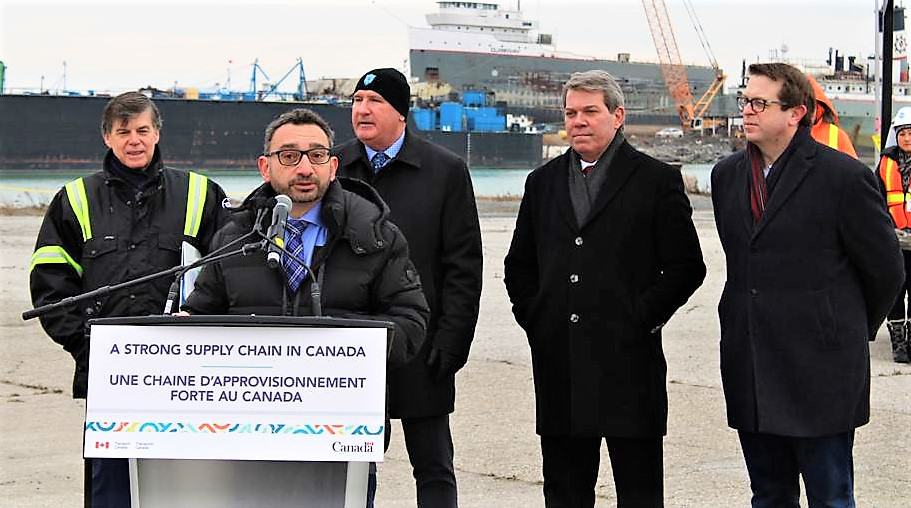 Anyone who’s seen empty shelves in grocery stores and pharmacies has heard the same explanation parroted over and over again – “supply chain issues.”

While that seems vague, it means simply that due to various shipping issues, supplies can’t get to retailers quite quickly enough.

As a key component in the shipping lanes of the St. Lawrence Seaway, the Welland Canal, literally the only waterway connection between Lake Ontario and the rest of the Great Lakes, plays a vital role in keeping water transportation open for the movement of supplies.

To that end, federal Transport Minister Omar Alghabra stopped into Port Colborne today (January 11) to announce $22.7 million in federal funding to help update the Welland Canal and allow for more ships to travel through the corridor.

“This investment will have important benefits for the region, such as relieving supply chain congestion and facilitating the movement of goods at the port,” said the Ministry.

The $22.7 million is part of a larger $45 million project that will support the reconstruction and rehabilitation of three wharves in Port Colborne.

“Investing in the rehabilitation of existing infrastructure to improve the quality and the efficiency of our supply chains is crucial to Canada’s economic success and sustainable development,” said Alghabra at this morning’s announcement, adding the project will boost freight shipments by one million metric tonnes per year.

“Our government’s investment in the Niagara region will help ensure that the supply chains here in Ontario and throughout our country remain efficient and reliable for future generations.”

Badawey called the funding a game changer for Niagara.

“New business and new opportunities are being created on once-abandoned lands along the Welland Canal and today our government is taking a bold step in strengthening the Niagara Ports Trade Corridor while also opening the door to an expansion of Niagara’s world class tourism market,” the Niagara Centre said.

Bittle, whose riding is situated at the canal’s north end, called the funding an example of how the government and St. Lawrence Seaway Management Corporation are working together to speed up the movement of goods.

“The rehabilitation of the wharves will improve multimodal connectivity along trade routes by being close to railways and allowing access to international markets,” he noted.