If you happen to travel north and south in Peel, you may be accustomed to long delays in traffic along routes such as Dixie and Tomken. This is not because of frequent car crashes (although the industrial area around northeast Mississauga and south Brampton is a hotspot for them), but because for several years, the Region of Peel has been doing a major water main construction project.

According to this corporate report received by Mississauga City Council this week, the Hanlan Feedermain Project is the region's largest and most extensive water-main project, and when completed the intention is that it will carry water from the Lakeview Water Treatment Plant on Lake Ontario to the Hanlan Reservoir and Pumping Station at the north-east corner of Tomken and Britannia Road.

But the Hanlan Project has a "side project" within the overall project itself. The Burnhamthorpe Water Project is a 12 km installation of water and wastewater pipes described by city staff as an integral part of the overall Hanlan Project. The goal is to improve water and sanitary sewer infrastructure in support of approved growth in City Centre and the surrounding area.

Mississauga City Council was presented with an update on the project, along with a timeline of how long the construction will last when it commences this summer. This photo is courtesy of Rachael Williams (taken with permission)

The project around City Centre will be done in phases, which is broken down into the following:

The overall cost of this project was pegged at $200 million, according to the report. Staff also mentioned that these installations and upgrades needed to be done before the Hurontario Light Rail Transit (LRT) is completed. But if you look at the diagram, the duration of the Burnhamthorpe project and the LRT construction will overlap with each other, as the LRT will be constructed between 2018-2022. 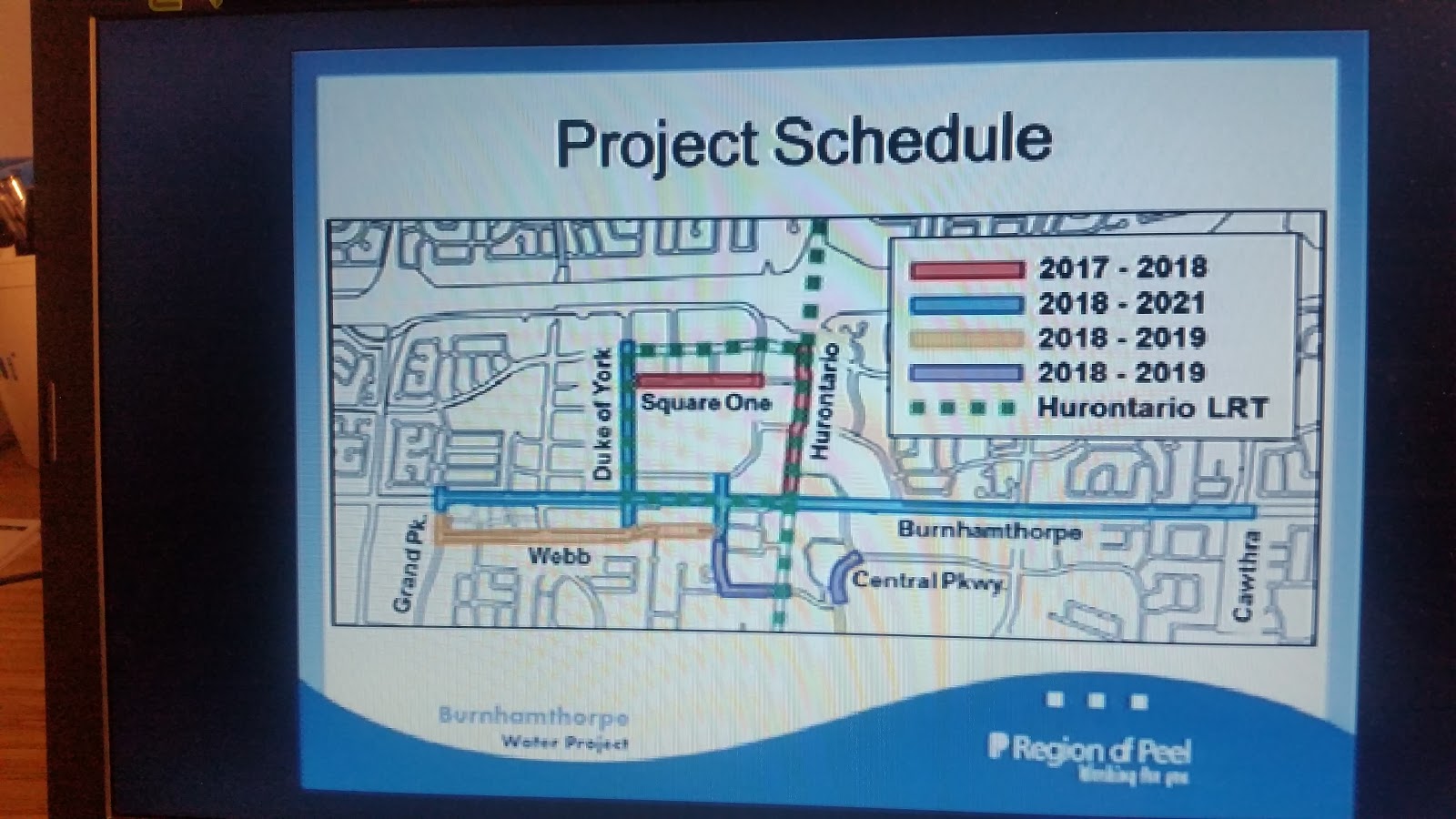 On the surface, you may believe that doing two projects at the same time seems rather silly and unnecessarily inconvenient. But on another level, there is some semblance of logic in terms of doing this watermain construction alongside some of the LRT work. If you're already digging up the roads to install water pipes, why not kill two birds with one stone?

As for concerns from the councillors, they were the expected traffic delays, and need to plan ahead, as Councillor Chris Fonseca mentioned the need for educating the public on what is going to happen. But I think Councillor Nando Iannicca, whom I have in the past mentioned having the gift of gab, outdid himself this time when he said Mississauga could end up like Flint, Michigan if we don't get our pipes fixed.

But while Iannicca put up that somewhat alarmist red flag, he then goes on to say, "our state of repair in Mississauga is marvelous; it's not sexy, but it needs to get done. If you go to Montreal like I do every now and then, once you drive on their asphalt you know you're in a different jurisdiction". I myself have been to Montreal, and I can also attest that their roads look like they could at least use some decent repaving, let alone what else they need repairing.

Mississauga does need to do this project; it's not one of those things one has the luxury to procrastinate on. But we're definitely nowhere to drinking brown water anytime soon. So for all you drivers out there, plan ahead and go to work earlier if you want to try beating heavy traffic!