WATCH: Armoured truck loaded with silver and gold in Mississauga rolls over on the 401 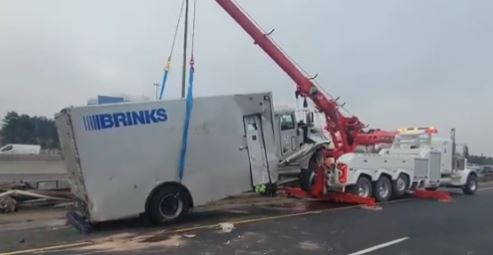 An armoured truck in Mississauga laoded with silver and gold tipped onto its side after a roll over on Hwy 401 on New Year’s Eve.

In a video posted n Twitter, the Ontario Provincial Police Highway Safety Division say a Brinks truck was loaded with silver and gold when it was headed northbound on Hwy 427 exiting onto the 401 at Renforth Dr.

Police say the driver of the armoured truck saw a southbound vehicle lose control up ahead, and the driver swerved to avoid a collision.

The truck tipped over onto its side but none of the precious metals came out of the cargo hold.

There were reportedly three guards in the truck when it rolled over, who were able to get out of the vehicle with the help of some good Samaritans passing by.

You can watch more of the video here.

Police say the guards escaped the crash with only some cuts and scrapes.

All the gold and silver was loaded onto a second armoured vehicle, and all the cargo was accounted for.

Two westbound lanes of the 401 approaching Person Airport were blocked as crews worked to clear the crash. Police also said the ramp from Eglinton was also closed.

Rollover of armored truck #Hwy401 wb at Renforth. No serious injuries, all the gold and silver is accounted for and on the way to its intended destination. pic.twitter.com/WwuFRgp4eZ