Walmart to remove toy cactus that sings about cocaine 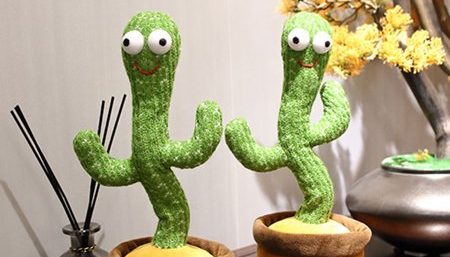 A children's talking toy cactus has been removed from Walmart's website after complaints that a Polish rap song it plays contains profanities, references to cocaine and thoughts of suicide. WALMART PHOTO

A dancing cactus is getting sidelined by Walmart across Canada.

The retail giant has reportedly pulled a plush children’s talking toy cactus from its website after complaints that a Polish rap song it plays contains profanities, references to cocaine and thoughts of suicide.

Sold online as an education toy, the Dancing Cactus Toy Talking Cactus Twist Learning Toy contains a song by Polish rapper Cypis called “Gdzie jest biały węgorz?” which translates to English as “Where is the White Eel?,” believed to be a reference to cocaine.

The dancing cactus has songs in three different languages, including English, Spanish and Polish.

The toy, which was sold for just under $26 on Walmart.ca, comes from a Chinese manufacturer is also sold in numerous countries in Europe, where customers have also complained.

Walmart told CTV News that the items are sold by a third party seller on its website and that they will be removing the items from its website.