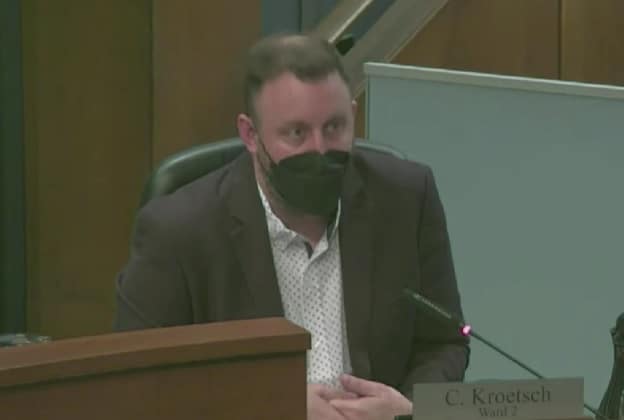 Frustration reigned as a non-profit’s pitch for a tiny shelters pilot project in Hamilton — which could help 10 unhoused people avoid health damages from living on the streets — remains impossible to nail down.

For the second time in 50 days, a funding request that Hamilton Alliance for Tiny Shelters (HATS) has made to the City of Hamilton has been deferred. City councillors on the emergency and community services committee (ECSC) heard a presentation today from HATS leaders Julia Kollek, Dan Bednis and Tom Cooper about the proposal to build shelters in Hamilton, with the city contributing $100,000 annually over the next three years.

It’s not intended to be permanent, but it could be life-saving. A group of healthcare providers estimate that over a 12-month span (June 2021 to May 2022), 29 unhoused people in the city died.

Concerns about the locations for HATS, and the distinct possibility that three years is a shorter span than the waitlist time to get into supportive housing in Hamilton, won the day. Councillors voted 5-0 to defer voting on the proposal until city staff can assess or reassess potential sites.

Before the vote, Jason Thorne, Hamilton’s general manager of planning and economic development, told council it would be “a couple months’ work” to score out sites. He added that a “money report” on the HATS proposal could be presented in four weeks, on Feb. 16.

“My questions pertained to operational matters,” Maureen Wilson said. “I believe we are talking about a place to live for people who are not here right now. I’m trying to do my due diligence so I can go to the public — all of the public — and say, ‘yes this question was raised,’ or ‘our housing director said this,’ or ‘ultimately, all the operational concerned were deemed to be, we can work them out.’

“I say this is actually a consistent position — my responsibility is to all residents, whether they are unhoused or housed,” Wilson added. “In providing this kind of service, is this better than an unsanctioned encampment? And tell me how it is, other than there are hard walls and not soft walls (in a tent or makeshift shelter). And those questions come with things that are going to hold us accountable.

“I understand the frustration. I, too, was hoping I would receive a recommendation, here’s a proposal, and here’s a site. Why have we chosen this site? We don’t have that.”

Wilson said she had heard one potential site has soil contamination and she has not received that information. “I completely sympathize with some of the people behind me,” she said, referring to people in the gallery.

The HATS group has garnered monetary support from 700 people in Hamilton, and says it has $300,000 in funding that it hopes the city would match. Kollek, president of HATS, Bednis, its governance chair, and Cooper, the treasurer, emphasized that endorsement from local government would boost HATS’ chances of getting federal funding through the Canada Mortgage and Housing Corporation.

“Our frustration is often council is looking for us to dot the I’s and cross the T’s on operational issues,” Bednis said earlier in the meeting.

The prospect of going back to the drawing board on onsite locations led Jackson to remark, “it was a waste of time that HATS was here today.”

The HATS proposal has similarities to A Better Tent City in Kitchener, which opened in 2020 and houses 50 people. But council heard only two of them have moved into stable housing, which opened a line of questioning about what happens at the end of the three-year pilot project.

Clark, who chairs the ECSC, noted several times that the discussion was bogged down. He pointed out there are believed to be 150 times as many people in Hamilton who are unhoused as the number HATS would initially help.

“I am frustrated,” he said. “We have approximately 1,500 people who are homeless in Hamilton, and we’re talking about 10. For a little under a year, we’ve been wrestling with this. Some people might be calling it politicization, but there is the matter of consultation with the neighbourhood (where HATS would go), and when we’re consulting, we may find people who are uncomfortable with this.

“What the program is, the safety, the security needs to be explained. Otherwise, people are going to be afraid. I get that. That’s the frustration… (but) that’s what politics is. We move people toward consensus. That’s our job.

“We keep running up against the same issue about site location,” Clark added. “So I think we should defer it.”

The HATS proposal was taken up today after being deferred on Dec. 1. At that time, HATS had come forward with a provisional location in the east end. But that didn’t fly, and the matter was put over till the new year.

Former school site not in play

Kroetsch, who unseated three-term councillor Jason Farr in Ward 2 this fall, asked why the site of a former downtown high school is not in consideration for HATS.

The school closed in 2019. The building is on a right-angle triangle-shaped piece of land between York Blvd., Bay St. N. and Cannon St. W., and is near social services agencies. It also kitty-corner across from the FirstOntario Centre arena, which is set to be redeveloped by HUPEG (Hamilton Urban Precinct Entertainment Group).

“When we spoke with HATS, the very, very short-term nature of that site made it not an option,” Thorne replied.

Asked by Kroetsch to “unpack” that, Thorne added, “I am making an assumption that it’s about the demolition and construction redevelopment. In speaking with HATS, they didn’t seem to think that was an option.”

Kroetsch replied, “I’ll leave it there with a happy question mark.”

The discussion about HATS followed a general issues committee (GIC) meeting on Wednesday, where Mayor Andrea Horwath and 14 of the 15 councillors received feedback about the city’s approach to encampments. The decision on whether to make a pilot program permanent remains open.

The city is funding warming centres through March 31, but heard that should also be seen as a stopgap.

“Folks are getting frostbite,” said Jo Aitcheson, a volunteer at the Hamilton Encampment Support Network. “There have been two people I know who have gotten amputation. I’ve had a few people collapse from sleep deprivation because you can’t sleep in the warming centres.”

Ward 15 Coun. Ted McMeekin was the only local representative who was not present for the GIC meeting on Wednesday.

The statistics about deaths of unhoused people in Hamilton are drawn from hamiltonhomelessmortality.weebly.com.