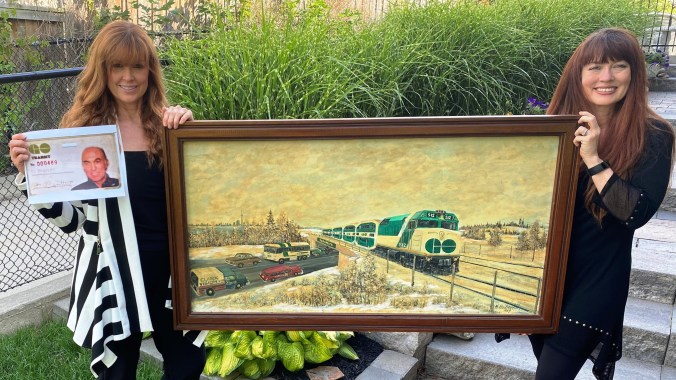 The daughters of a Mississauga man who worked for GO Transit for more than three decades have returned his retirement gift to the company.

And they’ve done so with the best of intentions, as a tribute to the man they describe as a “great family man and a hard worker.”

When Fred Bentley retired from GO in 1996, company officials presented him with a large painting of a moving GO train that had been completed by a local artist in 1989. It had been displayed on the office wall at the Steeprock bus garage in North York, where Bentley spent most of his career.

The painting had caught his eye, and his colleagues at GO thought it would be a fitting retirement gift.

Bentley, who proudly displayed the artwork in his living room for some two decades, according to his daughters Julie and Lisa, died in 2017.

Now, his family thought it was a good idea, and fitting tribute, to donate the piece of GO memorabilia back to the company. The painting will hang on a wall inside the Streetsville GO bus garage.

“We are so happy for the painting to find its way back to GO Transit. It’s a special tribute to our dad,” said Julie Bentley-McLoughlin. “There’s really no greater honour.

“He had some really good friends at GO Transit and enjoyed his time there,” she continued. “He took immense pride in his work.”

GO Transit senior manager of bus operations, Anthony Pezzetti, says the painting will make a great addition to the GO Bus Museum, which houses pieces from current and former employees.

“Getting the painting from Julie and her family, it really feels like part of our family has come home,” he said.

Bentley, who was born and raised in Toronto before moving to Mississauga to raise his family, started working at Grey Coach in the 1970s. A few years later, he made the move to GO.