Whitby soccer sensation Olivia Smith will be hoping National Woman’s coach Bev Priestman is paying close attention to the U20 Women’s World Cup, which gets underway tomorrow from Costa Rica.

Smith, who turned 18 Friday and will play collegiate soccer for Penn State in September, will suit up for Canada in the U20 World Cup in the hope of getting another call-up to the senior team.

After leading Canada to U20 victory first, of course.

Smith, part of a quartet of Durham Region athletes suiting up for Canada at the tournament, became the youngest ever Canadian soccer international when she was tapped by Priestman to play a couple of senior matches for Canada at a tournament in China in 2019 at the age of 15.

She hasn’t got a sniff since, though with a few national team veterans (Christine Sinclair, maybe?) looking at retirement soon, a good performance in Costa Rica for the striker may be just the ticket for Smith.

Canada first game at the tournament is Thursday against the Republic of Korea. 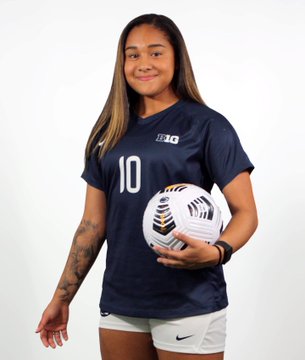 Smith was Canada’s leading scorer in the CONCACAF U20 qualifying round with seven goals and will be joined on the tournament roster by Nikayla Small of Pickering (who has also been called up to play for the senior team but has yet to get into a match), Surita Joy Thurton of Ajax and Miya Grant-Clavijo, who began her minor soccer career in Ajax before moving to Toronto at the age of eight.

Canada qualified for the FIFA U-20 Women’s World Cup earlier this year by finishing in third place at the CONCACAF Women’s Under-20 Championship in the Dominican Republic. Across seven matches in just over two weeks, Canada posted six wins and one loss with 32 goals scored and just one goal conceded.

The Canadian women lost their first crack at qualifying for the World Cup when they were beaten 1-0 by Mexico in the CONCACAF semi-final. But they made no mistake in the third-place game, beating Puerto Rico 2-0 on first-half goals by Zoe Burns and Florianne Jourde.

Canada have been drawn into a challenging Group C for the World Cup (August 10-28), facing Korea on August 11, France on August 14 and Nigeria on August 17. All of Canada’s matches will be broadcast live on TSN and RDS.

France finished fourth, second and third at the last three editions of the FIFA championship and defeated Germany in the final of the 2019 European Women’s Under-19 Championship.

Nigeria, runner-up in 2010 and 2014, has advanced to the knockout rounds in seven of its nine trips to the tournament. South Korea was third in 2010 and has made the quarter-finals on two of its four other visits to the championship.

Canada’s best performance at this tournament was the first one in 2002 when it was U19. Christine Sinclair scored a record ten goals (since tied) in leading the Canadians to the final, where they were beaten by the USA 1-0.

Sinclair was named the World Cup MVP along with the Golden Boot.