VIDEO: Rare Footage of the Salmon Run in Mississauga 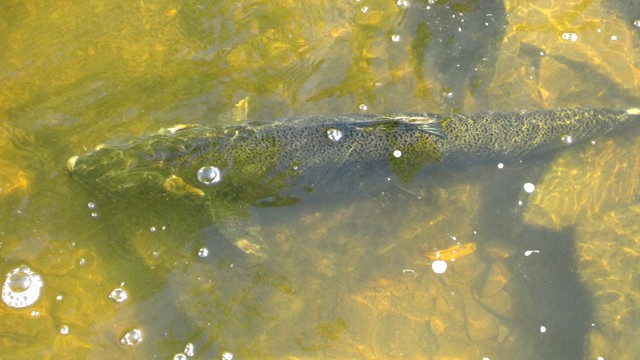 When people think of Mississauga, they might not think–at least not at first–of its more natural elements.

The city is actually full of gorgeous parks, forests and beautiful bodies of water, but one thing it’s not quite so known for (although it should be) is its really incredible view of the salmon run.

What people may not know is that the Credit River is home to a plethora of salmon and, by extension, the salmon run that takes place every yer from late August to about late November. It happens again during the spring thaw.

While a lot of people aren’t aware they can catch the run in Mississauga (some probably aren’t even aware it happens at all), it’s not uncommon see a lineup of Mississaugans along the Credit River shores in Erindale Park hoping to hook a monstrous fish.

In the fall, people converge upon the river to catch 20+ pounds of gigantic salmon and, believe it or not, there are a lot of them (fish, that is, not people). When the salmon are swimming against the river’s current, it’s a breathtaking sight. Sometimes, there are so many of them it’s hard to make out spaces of river in between them all.

While fishing isn’t for everyone, nature watching is and you don’t need a special license to watch the fish swim furiously through the river. If you want to check out the run, there is a perfect spot located on a little bridge on Barbertown Rd., just between Creditview and Mississauga Rd.

Here’s a hint: go after a heavy rainfall for a really sweet view.

If you aren’t willing to brave the cold but don’t want to travel all the way to Ripley’s to see fish, check out this incredible footage of the salmon run.