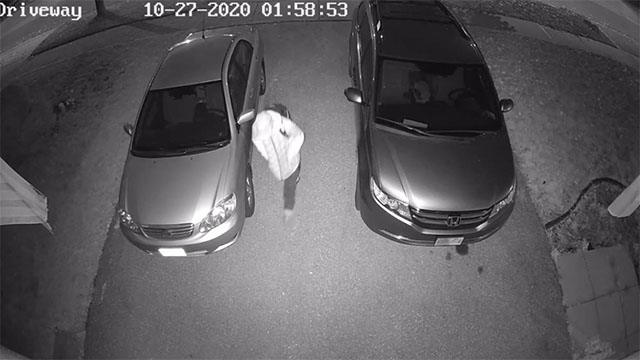 Police are appealing to the public for help in locating a suspect wanted in connection with several vehicle break-ins and a flag burning in Mississauga.

Peel police say that on Oct. 27, 2020, a resident told officers that someone set fire to an American flag attached to his house, which is located in the Woodeden Dr. and Vanier Dr. area.

Video surveillance released by police captures the suspect checking the doors of a parked vehicle in the victim’s driveway.

Police allege that the suspect walked over to a neighbouring residence and broke into a locked car.

Investigators believe the suspect could be connected to seven other vehicle-related thefts.

Police say the suspect is described as a white male who is approximately 5’8” to 6″ tall and about 170 to 190 pounds. He has a slim build and was last seen wearing dark Under Armour shoes, dark pants, a dark jacket, a dark sweater, a dark Under Armour baseball cap, and blue latex gloves. He was spotted carrying a black backpack with an orange Jordan logo in the middle and an orange zip-up pocket on the right side.

“Disregard for the property of citizens in our region will not be tolerated. I want to assure our residents that a team of dedicated investigators is committed to identifying the person responsible for these reprehensible acts and bringing that individual to justice”, said 11 Division Superintendent Radcliffe Rose in a statement.

Anyone with information regarding this incident is asked to contact investigators in the 11 Division Criminal Investigation Bureau at (905)453-2121 ext. 1133.