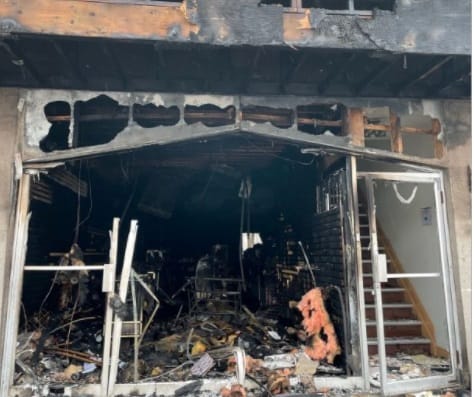 Peel Regional Police are appealing to the public for help in identifying a suspect they say is responsible for an explosion and fire at a Mississauga business back in March.

Investigators from the 12 Division Criminal Investigation Bureau are investigating the incident and have released photos and surveillance footage of the suspect in the hopes of identifying them.

According to a Peel Police news release issued on Thursday (June 17), emergency services were called on March 28, 2021, at approximately 4:39 a.m., to a fire in the area of Hurontario and Dundas St, Mississauga.

“An accelerant was thrown at a business by a suspect, causing an explosion, which created extensive damage to the unit and neighbouring units,” the release said.

“Mississauga Fire attended and extinguished the fire. There were no injuries as a result of the explosion.”

Investigators were able to locate video footage of the suspect and have shared photos of the arson and the suspect.

Anyone with information is asked to contact 12 Division Criminal Investigation Bureau at 905-453-3311 ext. 1233. Information may also be left anonymously by calling Crime Stoppers at 1-800-222-TIPS (8477) or by visiting peelcrimestoppers.ca.