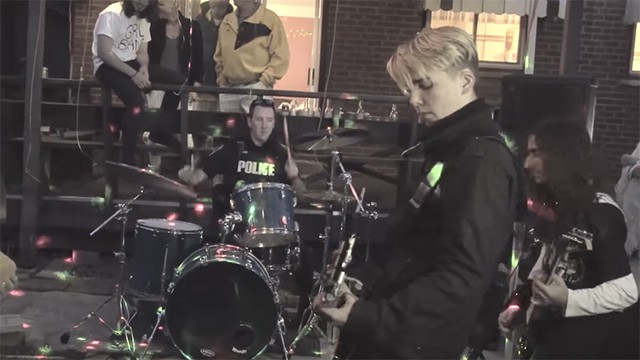 When uniformed police officers show up at a party, it’s rarely to bring good tidings to the partygoers.

But, based on a recent (and unexpected) event in Mississauga, it appears that isn’t always the case.

According to multiple media reports, an appearance by Peel police at a private backyard party that featured some independent live music began with a friendly noise warning and ended with an officer actively jamming with the band.

Local band Vinyl Ambush recently uploaded a video to YouTube that showed the young hard rock musicians hammering out some tunes with a constable on drums.

“Vinyl Ambush played a private event last night and it wasn’t long before the Peel Police showed up,” the band wrote on YouTube. “We thought the show was over but much to everyone’s delight, they joined in for an incredible jam session.”

The band added that the officers were so impressed by the set that, instead of putting a stop to the show, they asked to join in before offering the band a few words of wisdom.

“Talk about community outreach,” they wrote. “Many thanks to Peel Regional Police for making it such a fun and memorable night for the band and everyone there. You guys ROCK!”

Here’s a look at the video, courtesy of Vinyl Ambush: